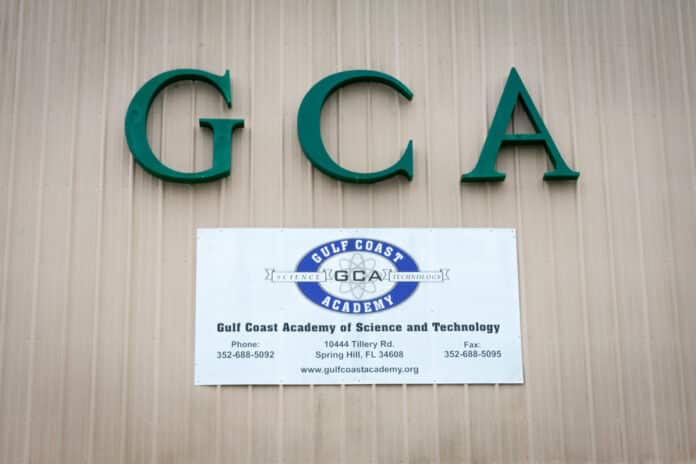 Gulf Coast Academy, one of three charter schools within the Brooksville / Spring Hill area, avoided imminent shut down on March 15th as school administrators finally entered into a contract with Hernando County Sheriff’s Office to provide a full-time “School Resource Officer” (SRO).  According to a media release from the Hernando County Sheriff’s Office:

“The Hernando County Sheriff’s Office, working in collaboration with each of the three charter schools in Hernando County, have facilitated the implementation of one full-time, permanent School Resource Deputy on each campus, beginning today.”

SRO’s are a requirement set forth in the Marjory Stoneman Douglas High School Public Safety Act; a law passed by Florida Governor Rick Scott on March 9, 2018 in response to the tragic shooting which took place on February 14, 2018 in Parkland, FL.  The presence of the crisis trained law enforcement officers serve as a deterrent to those who would otherwise attempt to enact gun or any other explosive related violence on school grounds. It is intended to provide students with a sense of safety while attending school.

Gulf Coast Academy was facing revocation of its charter if it did not agree to hire a SRO for campus security.  Over a year has passed since the Act was signed into law, yet Gulf Coast Academy still had not complied with the new requirement.  Instead, Gulf Coast academy had been operating under a security system comprised of a rotation of off-duty deputies.  The system was working well for the school yet was out of compliance with the new law.  As Gulf Coast Academy is technically a part of the Hernando County School District, the entire district was deemed out of compliance with the law.  The non-compliance caused school board officials to announce a deadline which would see the revocation of Gulf Coast’s charter if the matter remained unresolved.

The lack of compliance was not due to any specific form of defiance.  Dennis Alfonso, a school board attorney, said: “One resource officer would cost a Hernando County charter school about $75,000 annually.”  The founders of the Academy spent the interim time between the law being enacted and the signing of the contract with the Sheriff’s Office attempting to both figure out how to fit this new requirement into their schools’ budget and attempting to find ways to amend the legislation in order to retain their current system.

After a year of financial planning and legislative battling, Gulf Coast Academy finally sees itself compliant with the rest of the Hernando County School Board, setting itself up to retain its charter and continue to educate for remainder of the foreseeable future.