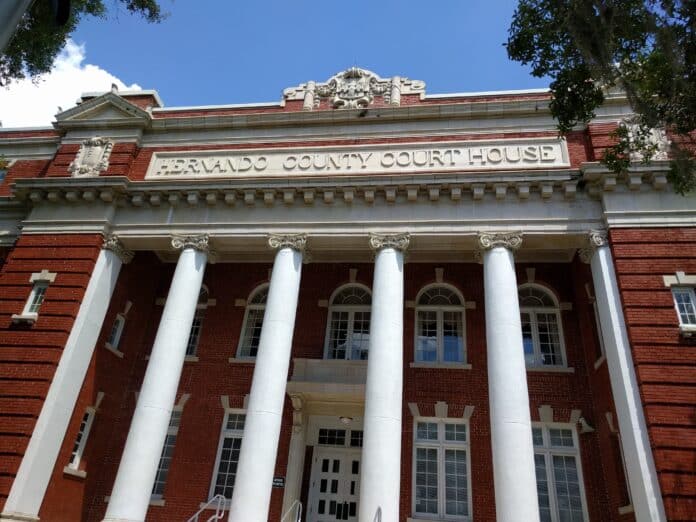 At the March 26, 2019 regular Board of County Commissioners meeting, Purchasing Director James Wunderle started the discussion by saying, “Usually Purchasing need not obtain the board’s approval for a Request for Qualifications (RFQ), but in this case, the department brought this before the board just for the visibility, because of the courts and their communications with the county and their need for space.”

Wunderle went on to recommend that the board authorize his department to prepare, advertise and post an RFQ for architectural design services for a five-phase judicial project.  The project is based on the letters from S. Sue Robbins, Chief Judge, Fifth Judicial Circuit to the county outlining the issues which need repair such as the installation of security cameras, security upgrades, 3 additional courtrooms on the 2nd floor, a new courtroom on the first floor, a new user friendly entry and expansion of the sally port and holding cells. $1.5 to $1.8 million in funding would come from the Court Improvement Funds for design and construction plans.

Judge Dan Merritt Jr. spoke at length to the board about several problems in the current judicial center.   “We’re here to the point in the Hernando county facility where the government center and the judicial branch in a modern era … we have safety concerns, and they’re legitimate.”

Merritt described situations where crowds of people exiting courtroom areas in to common areas having the potential to put victims in contact with alleged attackers.  “Whether they are opposing parties in a case, or whether they are victims in a criminal offense or victims of domestic violence…”  Merritt described a scene outside of another judge’s courtroom where both sides of a high-profile case were intermingled in a common area, and a disturbance ensued.
Judge Merritt also described how he has had to walk past individuals whom he’d previously jailed in order to enter his chambers.

Commissioner John Allocco asked if the space issues were causing issues with scheduling, causing civil cases to be extended or rescheduled.  Merritt said it was most likely a matter of Hernando County having to schedule an enormous number of civil cases.  “But we continually juggle every week, the courtrooms. Sometimes we run up against the fact that we’re going to have space (on a particular day).”

The Board of County Commissioners Chamber also doubles as the hearing room for the Child Support Hearing officer.  “You do what you can, and you make do, but the fact is, the people deserve better.”

Acting County Administrator Jeff Rogers commended Judge Merritt on his ongoing interest in resolving the Government Center space needs challenges.  “It’s an urgency (sic) for us to find the revenues and complete this project.”

Commissioner Wayne Dukes commented that the magnitude of the project calls for oral presentations when the responses are in place.  The board agreed with this addition unanimously, as well as voted approval 4-0.  Commissioner Steve Champion was absent during this meeting.