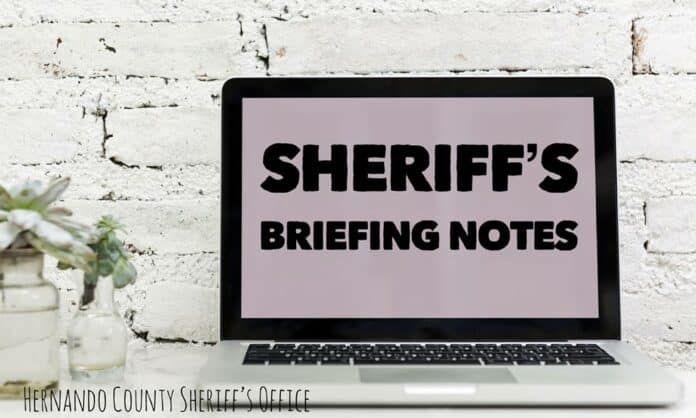 • Deputies responded to:
o Marine Incident – 3252 Gulfwinds Circle/Hernando Beach – Two Males (both 16YOA) took paddleboards out into the Gulf – They got stranded when the tide went out – Deputies were able to guide them back in as the tide came back in.
o Narcotics Complaint – 5244 Roble Avenue/Spring Hill – Female seen running naked in the street – Deputies and Fire/Rescue caught up with her at her house and also located a baggie of methamphetamine – Arrest/Female.
o Domestic Battery – Oaks Mobile Home Park/626 Broad Street/Brooksville – Boyfriend/Girlfriend – Suspect (boyfriend) located at the Oaks Motel – Arrested on Warrants from Pasco County.
o Suspicious Incident – 17440 Tavern Road/Brooksville – Male in late teens seen holding a cat by the feet/cat screaming – Male was possibly observed making a “cutting” motion – Cat found to have wounds – Cat take by HCSO Animal Services Officer to a vet – Active investigation.
o Traffic Stop – Jayson Road/Webster Street – Driver had expired D/L since 2011 – K-9 alerted on vehicle – Meth and marijuana located in vehicle – Arrest x2.
o Construction Burglary – Seaway Drive/Brooksville – Active.