HomeOutdoorsMeeting the People that Manage the Withlacoochee State Forest, Part I
Outdoors

Meeting the People that Manage the Withlacoochee State Forest, Part I 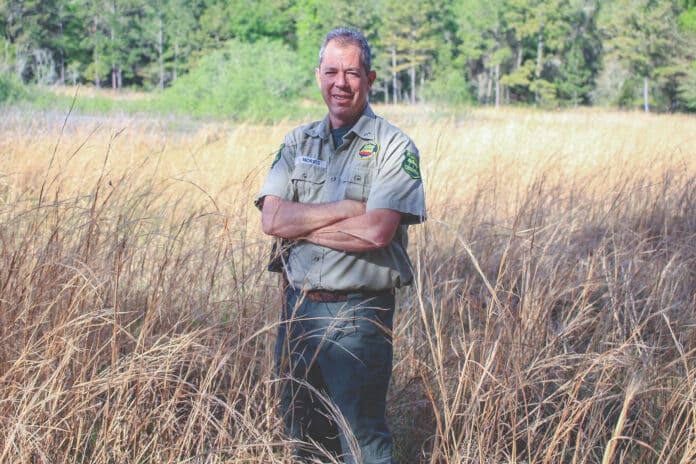 The Croom tract is named after the town of Croom which was situated along the Withlacoochee River. The industries around Croom included phosphate mining, turpentine distilling, and a sawmill. Croom was also the main stop on the railroad with a branch line connecting to Brooksville. When most of the timber had been harvested and phosphate mining slowed with the start of World War I, most of the population moved away. The remaining inhabitants were moved out of the Withlacoochee Forest as an action of the Resettlement Administration (RA) a part of the New Deal.

Over time the techniques for timber harvesting became more conservative, many people began to understand the need to maintain forest lands properly. In 1958, when the Withlacoochee State Forest was established, it was up to those within the agency to create a plan to manage the forest.

Withlacoochee State Forest was established through a 25-year lease-purchase agreement from the United State Department of Agriculture. Withlacoochee State Forest consisted of six different tracts of land totaling 157,315 acres located in Citrus, Hernando, Sumter, Pasco, and Lake counties. The final payment was made in 1982, and the title was transferred to the state of Florida in 1983.

This article is the first in a series focusing on the individuals dedicated to managing the Withlacoochee State Forest. Let me introduce you to Vince Morris, 53, Resource Administrator. Vince showed me specific areas within Croom, the projects he was involved in and some of his favorite spots.

Vince Morris has been with the Florida Forest Service for 22 years.  For the past two years, he has been in charge of managing timber and recreational uses of the forest.

“There is always a balancing act in the state forest,’ Morris said. “We have to make it useful for everybody. We can’t manage just for one purpose or another, and we have to try to balance all those uses, so one doesn’t ruin the rest.”

The Withlacoochee State Forest provides many functions. It is a place for migratory songbirds and a home to native and endangered wildlife and plant species.  There is timber harvesting, wildlife management, and many outdoor recreational opportunities. One crucial factor many rarely think about is clean water.

“One of the greatest functions of our state forest is clean water,” Morris said.  “Especially in the Citrus Tract.”

Certain areas of the forest are sandhill habitat, in which the soil is made up of fine and coarse sand. As it rains, the water soaks into the ground and flows into the water table.  Water then makes its way into the area’s springsheds such as Weeki Wachee and Crystal River.

“The water that originates in the state forest is really nice and clean because we don’t pollute the water (through harmful chemicals/fertilizers) and we maintain a good burn program,” Morris explained.

As we drove on Croom tract 17, the landscape featured a diversity of forest habitats.  Morris pointed out managed areas as well as those that will require management in the near future.

That is part of Morris’s job. He has to know the land, and he has to know where specific plant and wildlife species thrive, where there are opportunities for growth and areas that are of concern due to lack of fire or high levels of recreational traffic.

A part of forest improvement was the reintroduction of the red-cockaded woodpecker and Morris was active in that process. This particular woodpecker takes residence only in older longleaf pine habitats. With the sparsity of older pine tree habitats, these birds were facing extinction in Florida.

When conservation became a priority, the practice of pine tree replenishment began.  When clear cutting is involved, 500 to 700 seedlings are planted. The Florida Forest Service has an active seedling orchard that consists of 200 acres of longleaf and other pine species just for this purpose.

Improperly managed pines can become susceptible to a destructive pest, the southern pine beetle. This beetle has destroyed many pines in the southeast. However, with proper land management, including prescribed burns the Withlacoochee State Forest is in good shape.

“We maintain genetic diversity if the balance isn’t right, the southern pine beetle can wipe out all the trees,” said Morris.

Woodpeckers, predatory beetles, and wasps prey on those beetles before they can spread to the next tree.  However, in an unhealthy or unmanaged area which cannot support these species, there would be nothing to eat the beetle.

Withlacoochee State Forest is also made up of basin marshes. Basin areas are ground depressions that retain water from rain and a valuable ecosystem for wildlife.

Coastal plain willows outline this basin with broomsedge grass. White egrets, red-shouldered hawks and barred owls rely on these areas as a source for food, such as insects, tadpoles and other amphibians. These are hidden jewels within the forest and play an essential role in the ecosystem. They bring life to the forest, even when they are dry.

“You can have a little pond like this which is huge for a diversity of animals and plants,” Morris said. “But people will take their four-wheel drives out there (in the basin) and tear it up.”

Morris also stated that four-wheeling is a significant threat to our forest. One mud truck driving in and out of a semi-dry basin marsh can ruin it for a species of frog in just one night. Unfortunately, the Twin Pond basin was getting severely damaged.  The Florida Forest Service was forced to put up cables deterring vehicles from entering, however, the cables were cut.

Other favorite activities surrounding the Withlacoochee State Forest are ATV and dirt bike riding at the Croom Motorcycle Area, geocaching, horseback riding, hiking, and trail biking.  There are a variety of organizations and clubs associated with each of these activities. A majority of those clubs give back to the forest.

Over the years Morris has built strong relationships with club members who have undertaken improvement projects for the forest.  Bob Wilcox is the Trail Boss for Croom in the SWAMP (South West Association of Mountain bike Peddlers), a competitive mountain bike club out of Saint Petersburg.  Croom in the SWAMP recently built a pavilion at the Tucker Hill trailhead on Croom Rd just seven miles west of 41 in Brooksville. The pavilion was paid for by proceeds from SWAMP events.

Recreational clubs like SWAMP work together with the Florida Forest Service to be responsible for maintaining their specific and designated trail, whether it be horseback riding or an enduro course used once a year.

“We don’t necessarily have the resources to manage recreational uses completely on our own, so our recreation department works with people like Bob Wilcox,” Morris said. “He is one of many partners we have.”

Everyone that works with the Florida Forest Service plays an important role, and since 1958 those that dedicate themselves to maintain Withlacoochee State Forest knows that it is more than just a job- it’s for the forest.

“It’s my thing,” Morris said. “I feel like I am making people happy by providing a world-class resource for the public.”