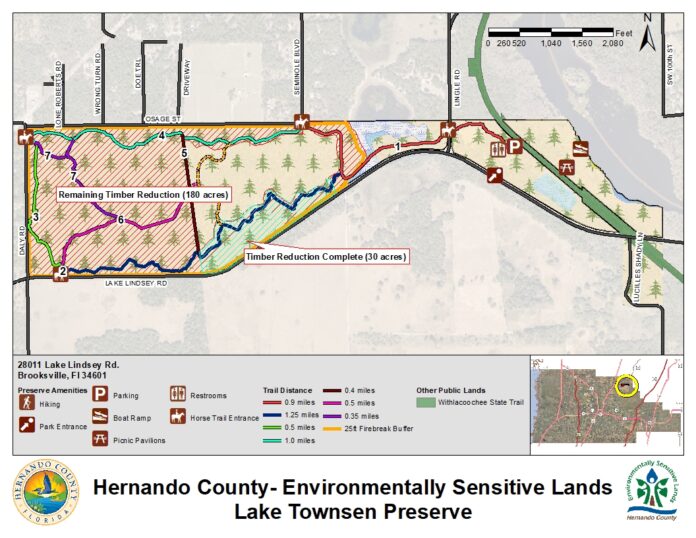 This article coincides with citizen comments and “Update Regarding Relocation of Gopher Tortoises to Environmentally Sensitive Lands at Lake Townsen Preserve” agenda items of the Board of County Commission meeting April 9, 2019

Pat Miketinac submitted prepared packets to the board and commented on the destruction of the Lake Townsen Forest as part of an ongoing habitat restoration project.  Miketinac reports that many other species of trees are being destroyed except for scattered Longleaf Pine. “The stated reason is … for habitat restoration, for the creation of gopher tortoise recipient sites.”  He went on to say that destruction of the other types of vegetation because the back five acres of our property is the same Arredondo soil classification, that’s still home to native vegetation, with many gopher tortoise burrows.  Miketinac said that some protected areas are left with nothing but Longleaf pines. “It looks like Hiroshima after the blast.”

Shirley Miketinac addressed the board, and began with, “Today I have a fairy tale for our children.  Once upon a time there were great, lush diverse forests all across Hernando county. The envy of the world, deep shade canopies, a mystery, a joy, a wonder.

“But alas, they’ve all been burned, shredded and poisoned to create pine tree farms to sell cheap lumber to corporations … they sell much of it to China.  The corporations don’t pay for the land, taxes or employees. The citizens do all of that for them. Chassahowitzka, Withlacoochee, Chinsegut, Perry Oldenburg, to name a few.  And now they’ve added Lake Townsen Regional Park to that list.

“I’m devastated that our children will never know the great forests of Hernando County, except in fairy tales, or pictures.

“Lake Townsen is a Hernando County Park.  Of the 375 acres, 100 have just recently been destroyed, not a green plant left on the mechanically shredded acres, just sand and rubble and scraggly pines.

“Another 180 acres are slated to be destroyed by fire, machines and / or chemicals and harvesting over the next six months.  Everyone, please needs to go out to Istachatta / Nobleton and witness the destruction of this once-proud forest firsthand.”

In closing, Miketinac said, “Lake Townsen was granted to Hernando County in 1974 … for the express purpose of public recreation.  The people of the neighborhood fund-raised to pay for the fencing, ballpark and playground. The county put in equestrian trails, but who’s … going to want to ride out there now when the shade canopy has been destroyed?  You’ve got burned ashes, chopped up rubble and scrub, lingering carcinogenic chemicals. There’s RoundUp™ being used. Will that get into the lakes and river?”

Pam Everett, who lives in the area described by the Miketinacs, asked the board if any member or staff has witnessed the current state of the forest.  “I’m overrun with wildlife now. Everyone likes to see a deer in their backyard, but I have 20-30 every single night.” Everett said squirrels, opossum and other wildlife are overtaking her yard because they have no place to go.

According to Everett, horse trails are sporting brand-new signs that they are protected, yet there is highway visible from the trails that used to be shielded by trees.  Visitors from surrounding counties have not been as numerous, and the decrease in visitors threatens two small businesses in the area.

During Board/Staff Responses, Interim County Administrator Rogers mentioned that the concerns regarding Lake Townsen would be addressed during the meeting.   Dukes added, “Unfortunately, I’m the person who started that process, because we were paying $2000 a piece to have our turtles taken by contractor. St. Lucie County had a program where they were keeping (the tortoises) in the county. The program has taken so long because of the restrictions put upon individual counties by the state.  I had no idea that it had gone to this size, and that’s a question for staff. I know that there had to be underbrush … but to cut trees down… I’m not sure how a gopher tortoise interacts with a tree… so I’m concerned about that, because it was not the intent in my mind. I’m not the person who makes the rules… I am eager to hear from staff, and I am concerned about that.”

Commissioner Wayne Dukes said he was surprised that the Lake Townsen project has taken 7 years.  “I thought there was already a turtle hotel out there,” Dukes said.

Singer explained that in response to questions from the public, the legal department reviewed the project and determined that “creation of the recipient site on the property as well as habitat restoration and management activities were consistent with the deed and the application for obtaining the property.”

Preparing to explain the specifics of restoring the site, Singer displayed an aerial map from 1974, indicating areas of sparse tree growth and vegetation, ostensibly that have since become overrun with trees and vegetation.

Commissioner John Allocco asked Singer how the determination is made that a site has been ‘restored.’   Singer answered that there is a classification system that is used. Lake Townsen is classified as “Upland conifer forest” and the specifics of its restoration were not available during the presentation.

Singer did show that timber is being harvested from Lake Townsen, however it is for the purpose of restoring Longleaf Pine for the tortoise habitat, while maintaining canopy cover required by FWC.

Shirley Miketinac was the first to ask Singer, “If you had a chance to save the gopher tortoises and our beautiful mixed hardwood forests, wouldn’t you do both?”  Miketinac invited the board and staff to call her directly to arrange a meeting so she can take them to the areas she has spoken about. “Gopher tortoises are not endangered… their status is ‘Threatened’ due to growth of industry and habitat destruction.”   Regarding the destruction of trees, Miketinac said, “Some of them got sent over to CEMEX to be burned … (others) are on a ship to China for tens or hundreds of thousands of dollars. This is the game the industry plays.” She went on to say that the tortoises don’t need to live in the forest, as they can live anywhere.

Miketinac also expressed concern about an upper respiratory ailment affecting tortoises of the Perry Oldenburg preserve and the fact that juvenile tortoises consume a lot of acorns.  “So what did we do? We cut down all the oak trees.”

Steven Dix supports the project.  “I’ve hiked that area for many years.  I’ve always considered it to be too overgrown, too many oaks for the type of habitat it should be.   All the practices I’m seeing there match very closely what I see the Division of Forestry, the Water Management District, and Fish and Wildlife are doing.”  Dix stated he owns similar property in North Florida, and maintains it by a system of mechanical shredding and burning. He commended the county on a great job.

Eugene Kelly of Brooksville introduced himself as a Conservation Biologist of 30 years.  Kelly reported previously serving on the county’s ESL Committee until it was dissolved. Kelly was on the committee in 2012 when the Lake Townsen project began, and like Dukes, has thought about the amount of time spent so far, with more work to do.  Kelly summarized that a habitat restoration project like this is “like hitting the reset button. The reason we’ve lost 5 years is because we didn’t take out these hardwoods in 2012.”

Singer expects 6-12 months for the timber reduction to be completed.

The following media release was distributed by the county late last month:

“(Brooksville, FL) Portions of the equestrian trails at Lake Townsen Preserve, located at 28011 Lake Lindsey Road in Brooksville, will be temporarily closed over the next six months due to a habitat restoration project. This project is being conducted by the Environmentally Sensitive Lands (ESL) program to improve native sandhill habitat for the creation of a permitted gopher tortoise recipient site. An equestrian trail closure schedule will be posted at the preserve’s parking area pay station as well as on the Hernando County website once it becomes available.

“Several phases of this project have been completed since the Board of County Commission directed ESL staff to begin moving forward in 2012 including two mechanical treatments, one chemical treatment and two prescribed burns. For the current phase of the project, the County has partnered with the Florida Forest Service (FFS) to administer a timber harvest. This harvest will selectively reduce nuisance, overgrown hardwood and sand pine trees while retaining and enhancing growth of native longleaf pines and beneficial herbaceous ground cover. Target conditions for this area are 50 percent or greater of herbaceous ground cover and 40 percent or less of canopy cover. Following the timber harvest habitat restoration phase of this project, the FFS will assist County staff in installing fresh fire breaks surrounding the perimeter of the restoration project site to mitigate for potential wildfire and perform a prescribed burn to further enrich the native conditions.

“The creation of a gopher tortoise recipient site will be beneficial to more than just area tortoises, the restored habitat will provide a more vibrant ecosystem supporting a wider variety of native plants and wildlife. Additionally, County projects requiring gopher tortoise relocations will be less costly, saving taxpayer dollars, and interagency partnerships formed during these projects will carry on into the future.

Editor’s Note: The area is known as Lake Townsend, Townsen Lake and Lake Townsen. The Lake was named after Istachatta’s founder and postmaster Francis M. Townsend. He built a ferry across the Withlacoochee River in hopes of becoming a stop on the stagecoach route. The alternate spelling Townsen is the result of a transcription error.