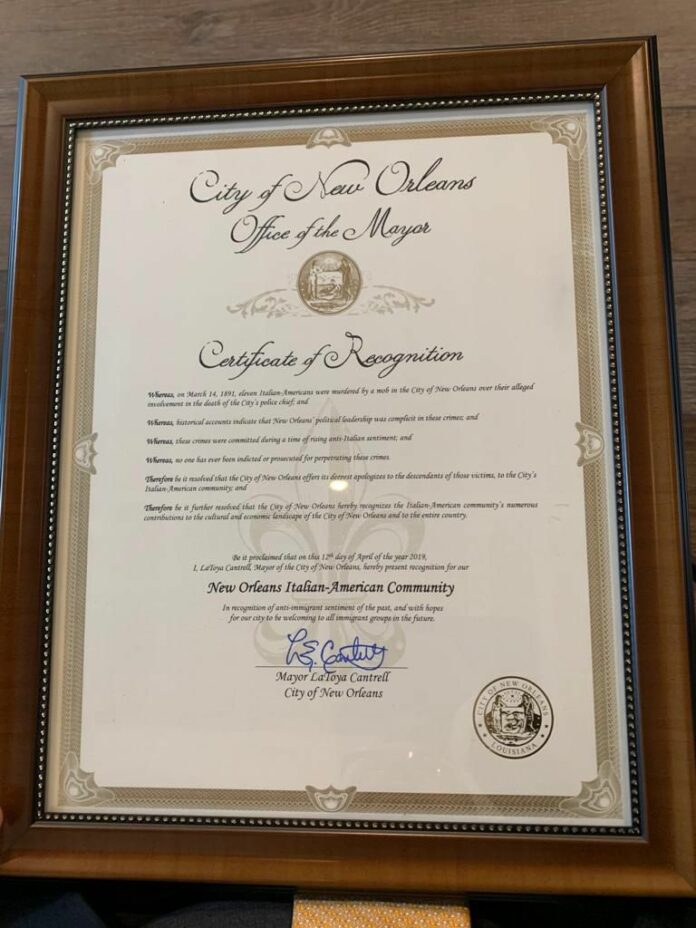 New Orleans Mayor LaToya Cantrell issued a Certificate of Recognition with an apology to the descendants of those killed and the Italian American community on Friday morning, April 12, 2019, for the “largest mass lynching in United States history.” The lynching was of 11 Italian immigrants on March 14, 1891 by a large mob which contained many of New Orlean’s most prominent citizens. The Italians had been accused of the murder of the New Orleans Police Chief Commissioner David Hennessy. It is said while dying Hennessy identified his attackers as Italians using a slur to refer to them.

The details of the lynching are horrifying as the men were in jail after being acquitted or because of mistrials. Many of the men were shot several times and a couple where hung from lamp posts. They did spare a 14 year old boy, but they killed his father.

The lynching led Italy to close its embassy in the U.S. and the U.S. closed their Italian embassy in retaliation. New Orleans cracked down on the Italian immigrants arresting hundreds and banning them from working for government contractors.

This lynching was important locally as it led to many southern Italians leaving New Orleans for more welcoming cities. This led to the development of a large Italian-American community in Ybor City. The vast majority of these southern Italian immigrants were from rural areas and had few skills outside of agriculture. Some of these immigrants moved to the rural countryside around Tampa.

The Hernando County Superintendent’s Report for 1900 mentions 24 schools in Hernando County with one of them being Sicily. Sicily is also shown in ‘A Map of Hernando County, Florida.’ The map says it was Approved by the County Commissioners at their Meeting in May 1901. Local Banker and Citrus Grower Alfred A. McKethan used the map inside the front cover of his history book, Hernando County Our Story.