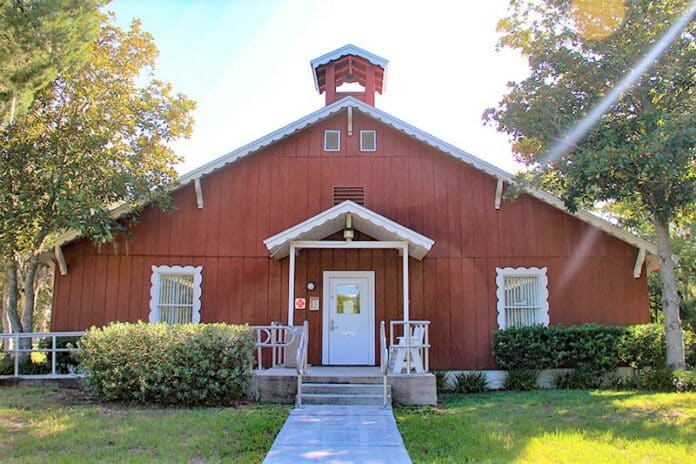 Many people have given generously of their time, expertise, money and even building materials, such as brick and sand, to make the county’s library system the valued community asset that it is today. In 1910 the Brooksville Woman’s Club formed and operated the first free lending library in Hernando County. By 1917 the collection totaled 1,083 volumes valued at$833. The Extension Service helped to give access to the library by delivering books to distant parts of the county where the extension agents were conducting various demonstration projects.

Through the years the library’s collection has been housed at a number of locations.Under the leadership of Margaret Dreier Robins in 1926, the library, a club center and gift shop were opened in one of the buildings that is now the Rogers’ Christmas House Village. In theGreat Depression decade of the 1930s a library was built on the corner of Bell and Mt. FairAvenues under the auspices of the Work Projects Administration (WPA). The first book mobile service in the state of Florida was established from there and books were transported weekly to rural communities and schools.

The county purchased property in Brooksville in 1949 for construction of a permanent facility to be located within a public park setting. The building was dedicated in 1950 as the Frederick Eugene Lykes, Jr. Memorial Library in memory of the late son of Frederick and Velma Lykes and in recognition of the effort and contributions from the Lykes family to the library. The distinctive and graceful Brooksville structure has since been expanded and renovated several times.

Branch libraries were gradually established in the Little Red Schoolhouse in Spring Hill, in Ridge Manor, in the Istachatta community building near the Withlacoochee River and at the produce cannery in the northwest part of the county. By 1977 the library had registered 11,690card holders and had an inventory of over 47,000 books. The staff included 4 full-time and 1part-time employees plus many volunteers.

County population growth was soaring by the 1980s and the system and the existing branches had to be expanded to handle the increase in usage; total system-wide circulation of materials was approaching 140,000 items per year. The Hernando County Public Library System joined the state library system and hired a director with the required professional library degree who began to write grants to obtain some of the funding needed. Construction of the West Hernando Branch, near Weeki Wachee Springs, was accomplished through the generosity of Alfred A. McKethan of the Hernando State Bank (later to be the Sun Bank) who matched a federal grant of $175,000; additional money and an ample 5-acre site were donated by the Royal Palm Beach Colony development group. The branch was dedicated in 1985. A major addition to that building was completed in July, 1993 using state and local funds and the branch was renamed the West Hernando – Staffordene T. Foggia Branch to honor her leadership in establishing the Hernando County Friends of the Library.

The most recent addition to the system has been the store-front East Hernando Branch atSunrise Plaza on Highway 50 near Interstate 75. This branch opened to the public in March,1994 with 14,000 items incorporating many donations from the former Ridge Manor Library.Today, the hours of operation have been extended significantly and many new service shave been added, including adult and children’s programs, periodical subscriptions, best sellers, reference service, video and audio cassette tapes, inter-library loan service, large-print books, microfilm reader/printers, recorded children’s stories available through Dial-A-Story, IRS tax forms, personal computers and a typewriter for public use and special equipment to aid those readers with vision impairment. A technical services department has been established to purchase materials, to create computer records for each item, to produce labels and plastic jackets for the items and to disperse the new materials throughout the county-wide system. Total circulation now exceeds 650,000 items per year. John J. Callahan, III, the library’s director from 1991 to 1995, and staff and volunteers succeeded in converting the massive card catalog system to a subject-author-title-keyword computerized database with access for patrons and staff. Remote access is available for those with personal computers and modems at home or in their offices.

The well-equipped, free public library is one of the hallmarks of a civilized society. The Hernando County Public Library System will continue to adapt to the community’s changing needs and to provide excellence in service through newly evolving technology and modes of communication.