The Trouble With Ticks 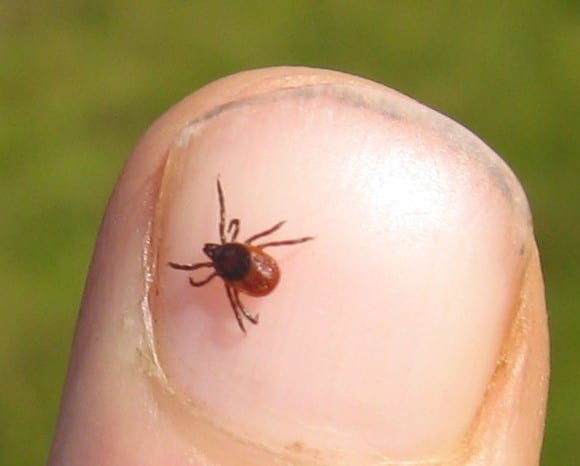 I love the outdoors and most everything you can come across in the wild places, but with a few exceptions.  At the top of my list of exceptions folks, are ticks; ticks are just nasty. They serve a purpose in the food chain, so I don’t fully condemn them, but I will go way out of my way to avoid having them creepy crawlers getting on me for a free lunch.  Despite my best efforts though, it still happens and during my twenty-eight day in the field hunting and guiding for wild turkeys, during the Spring Gobbler season, I was bitten seven times.

It may not sound like a big deal and I count my blessings that it has thus far turned out as such, However, ticks, especially the black-legged ticks, most commonly referred to as a “deer tick” can carry some pretty ugly diseases I really do not want to catch.  According to the Center for Disease Control (CDC), “Infections from tickborne diseases in the US are steadily increasing, with new tickborne diseases have been discovered in recent years.”   Although all tick species can carry viruses and bacteria, three main culprits found in Florida are the blacklegged “deer” tick mentioned earlier, the lone star tick, and the American dog tick.

Because ticks are active year-round, due to our warmer climate, they’re most active from April to October, so it’s important to know where ticks tend to congregate.  Generally, they are most often found in places where long grasses tend to grow. The reason is that they like to crawl up onto the stems and wait for an animal to walk by.  Tick biologists call that “questing.” They just kind of sit there with their legs outstretched hoping that something comes by. While the likelihood of coming across a tick in brushy, long grass is higher than if you’re in open forest, that doesn’t mean you are entirely in the clear.

Some ticks, like the lonestar ticks, gather under the leaf litter of the forest floor, because that way they can stay humid and moist and cannot dry out really fast.  If you stand there long enough, they will move towards you and actually crawl up your legs from there. That’s why it’s best to always be alert, as even if you’re not aware that you’re in tick habitat, you may be.

Tickborne diseases are transmitted to humans when a person is bitten by an infected tick.  Lyme disease, one of the most commonly reported, had more than 25,000 confirmed cases and 8,000 probable cases in 2018 throughout America.  Symptoms can range from a low-grade fever to body ache and a rash, often resembling a big bullseye. If you suspect you’ve been bitten by a tick, you should get to a doctor immediately.  All tick-borne diseases require immediate treatment upon diagnosis as the bacteria, viruses or parasites that cause the disease act quickly once they take hold.

My first line of defense against these nasty critters is to tuck my pants legs into my boots, as ticks mostly crawl upwards.  I tuck my shirt into my pants and wear long sleeve shirts in the field with the cuffs tightened. My second line of defense is treating my clothing with permethrin.  It’s one of the biggest deterrents to ticks and recently there was a study completed by the CDC which tested permethrin’s effect on blacklegged ticks, American dog ticks, and lone star ticks.  What they discovered was that the treated fabric appeared to be toxic to the ticks, killing them within minutes of exposure.

Before I discovered permethrin, DEET did a fair job of keeping the ugly bugs at bay, but as with most hunters, scent can come into play, which is why I switched to using permethrin on my hunting clothing; it’s practically odorless once dry.

After the hunt or any other time spent in the wild places, it’s important to do a tick check, which can be fun if you can talk your significant other into lending a hand.  And, although it’s not necessary to wash them first, always put your clothes in the dryer. While the heat doesn’t outright kill ticks, the dryness does; ticks need moisture to survive.

I thank you all for visiting with me here at the Sun each week and I love hearing from you too.  Drop me a note at [email protected] and tell me about your own success on the hunt. God Bless ya and Good Hunting!