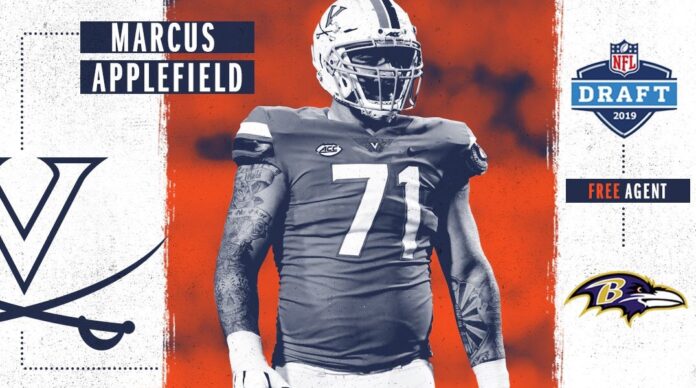 Getting signed onto an NFL roster is something that less than one percent of high school players end up doing. For former Weeki Wachee offensive lineman Marcus Applefield, signing with an NFL team became a reality last weekend.

Applefield signed with the Baltimore Ravens as an undrafted free agent. The University of Virginia had two players selected during the draft’s seven rounds, but Applefield and a few other Cavaliers received calls immediately after it concluded on Saturday. The former Hornet becomes the second area football player in the last two years to sign with the Ravens, as former Dade City Pasco wide receiver Janarion Grant signed with Baltimore last year after the draft.

In the 2018 season, Applefield started all 13 of Virginia’s games at right tackle and also saw time at right guard as well. Applefield was a key blocker for Cavaliers’ quarterback Bryce Perkins, who was one of the top two players in the country. Perkins amassed 2,600-plus passing yards (2,680) and 923 rushing yards, joining

Applefield becomes the first player to make his way onto an NFL roster coming from Hernando County since Nature Coast’s Matt Brieda, who is currently a part of the San Francisco 49ers. Brieda had his season end prematurely last fall when he sustained an ankle injury. The former Nature Coast tailback ended the season with 814 yards rushing for the 49ers.

Former Central running back DuJuan ‘Foxx’ Harris was another Hernando County great that moved on to play in the NFL. In 38 games played in the NFL, Harris has rushed for 590 yards on 145 carries and scored two touchdowns. He’s currently a free agent and could be picked up sometime during training camp or during the NFL 2018 campaign. Harris’ best season in the NFL was in 2012 when he was with the Packers and rushed for 157 yards on 34 carries and had a solid 4.6 yards per carry average. He scored both of his touchdowns that season as well.