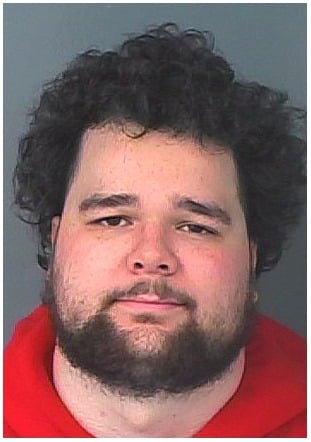 On 05-07-19 at 1:23 p.m., Hernando County sheriff’s deputies responded to the McDonald’s located at 2350 Commercial Way in Spring Hill in reference to a reported shooting.

Witnesses reported an individual riding in a gray-colored vehicle exited his vehicle and shot at the driver of a cream/beige-colored vehicle in the parking lot of McDonald’s.

When deputies arrived on scene both parties had already left McDonald’s.

While deputies were on scene, the victim of the attempted shooting, Kevin Terry W/M DOB/04-20-2000, called 911 from a house on Hanover Court in Spring Hill to report the shooting incident.

While neither Terry, nor his passenger, were hit by any of the bullets, Terry was cut by shards of broken glass caused by the driver’s side car windows shattering during the incident.

Terry was transported to a local hospital for treatment of non-life threatening injuries.

With the help of Terry, investigators were able to identify the shooter as Anthony J. Ficarra Jr. W/M DOB/03-18-1999. The driver of the vehicle Ficarra was riding in was identified as Joshua Faucher W/M DOB/11-13-1999.

Ficarra was quickly located at a residence on Copeland Way in Spring Hill where he was taken into custody.

Ficarra was charged with two counts of Attempted First Degree Murder and Shooting into an Occupied Vehicle. Additional charges are possible. He is currently being held at the Hernando County Detention Center in lieu of a $50,000 bond.

Faucher is cooperating with the investigation and has yet to be charged. The motive behind the shooting remains under investigation.

No additional details are available at this time.