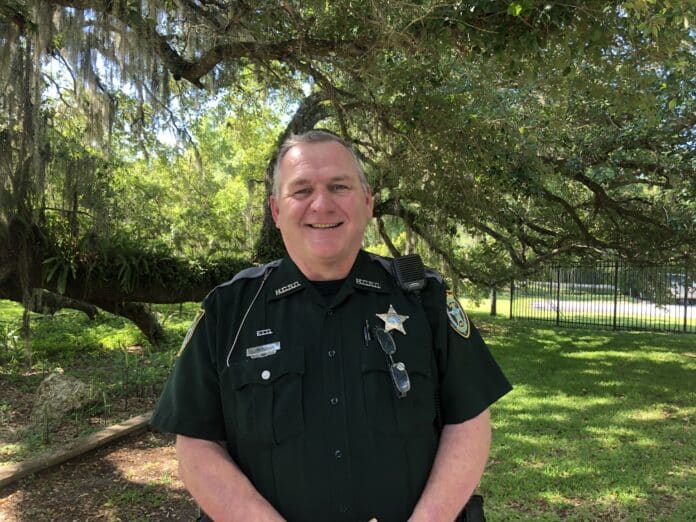 Hernando County Sheriff’s Office (HCSO) Deputy Jeff McDougal was on routine patrol around 2:30 AM  in Ridge Manor on May 3, 2019.  He was called to perform an area check after someone had called 911 from a cell phone, and hung up before any information could be obtained by the Emergency Dispatcher.

While investigating the source of the call, McDougal encountered a couple taking a walk.  Unusual for the late hour, he stopped to ask the couple if they had any knowledge of a problem or disturbance nearby.  They did not.

He then noticed one home with lights on.  “It was a well-manicured yard, the lights are on, and it’s 2:30 in the morning,” McDougal explained.  He parked, and made his way toward the home.  As he approached the residence, an elderly woman suddenly appeared from the doorway in a frantic manner telling McDougal that her son needed help, and that he would not wake up.

McDougal entered the home and made his way to the bedroom of the 63-year old man, who he found “in an awkward position down on the floor.”  He immediately radioed for medical assistance.  Checking for a pulse and respiration, he found neither.  McDougal also described the man as “ashen,” signifying that he had been without oxygen long enough to have a grayish skin color. “That all tells you he’s dead.”

With Hernando County Fire / Rescue (HCFR) on the way, Deputy McDougal put his training to work, and performed CPR (Cardiopulmonary Resuscitation).  He was also able to contact his recent trainee, Mark Kay, who was on patrol nearby.  Deputy Kay quickly arrived on the scene to assist.  Their efforts were successful, as evidenced by the man awakening with a gasp of air, and his pulse being restored.

“He (Kay) went to work right beside me.  I’m very proud of him,”  McDougal said.  “It’s a high adrenaline issue, but you’re trained for it.”

The patient arrived at the hospital breathing on his own, with a strong pulse and blood pressure.  He’s expected to make a full recovery.

CPR instruction is not exclusive to law enforcement, fire/rescue and the medical community.  Deputy

McDougal advises that everyone who is able, be trained in CPR.  It could change the outcome for someone who awaits emergency medical transport.