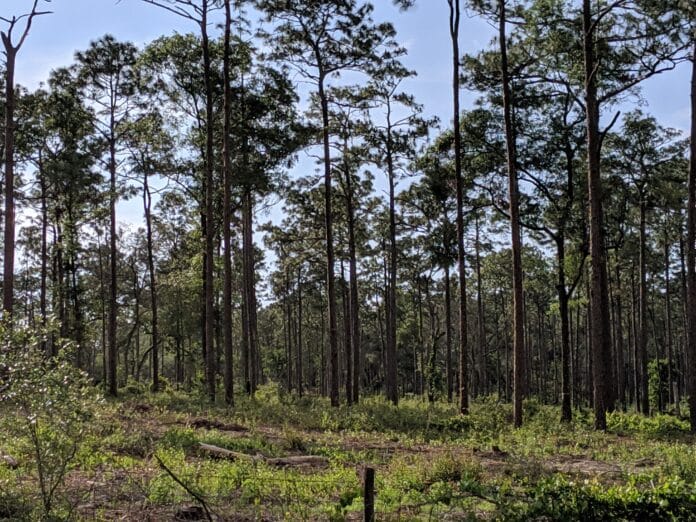 The Board of County Commissioners (BOCC) voted 5-0 at the regular meeting on May 14, 2019 to cease logging operations, but continue cleanup and restoration of the portion of Lake Townsen Park already in progress.

Hernando County Planning Director Ron Pianta  reviewed promises made at the last BOCC meeting, the first one being the suspension of all logging and restoration efforts until he and Environmentally Sensitive Lands Director Michael Singer met with the community.  Pianta and Singer did meet with concerned citizens at the park on the evening of May 2, 2019.  Described as a “good, interactive discussion,” Singer showed a breakdown of three possible solutions offered by meeting attendees.  More than 75% would like to see the restoration stopped in its current state, leaving the resident tortoises as they are, and not performing any further logging.

Moving in this direction, Commissioner John Allocco asked Singer how long it would take to realize any success of the project, after vegetation begins to grow back.  With allowing enough time to prevent any tree stress, another prescribed burn would be held on the eastern side of the property to clear felled trees and overgrown vegetation.  Then, it would take another year to measure the success of that phase with a Vegetation Survey.

Pianta requested the board vote to allow them to complete the restoration on the portion already begun, without expanding into nearby areas.  That site would be then permitted as a gopher tortoise relocation site. As for the rest of the park, Pianta plans to engage with the community before moving forward, and bringing those recommendations back to the board for a decision.

Commissioner Wayne Dukes received applause from the audience when he suggested planting new 8-foot oaks to possibly restore the tree canopy.  Dukes is in favor of the restoration project, and understands its necessity, as well as the rigid guidelines prescribed by FWC.

Agreeing with Dukes, Allocco also received praise from the public by saying, “Hopefully, if there’s any other work that’s done… with equestrian trails, hopefully we can do a better job of maintaining the canopy … I think if they could have started removing invasive species 30 feet off of the trail, a good bit of the concern would not have been.”