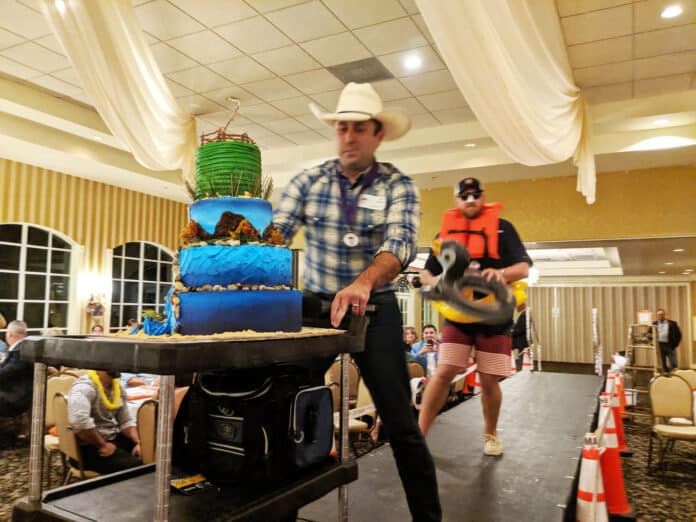 This year’s cast of celebrity bakers brought their best cakes.

Before the showcase of celebrity talent, attendees whet their appetites at the Cake Auction where they sampled and bid to take home the best of the home-baked specialties from private submissions.  For $1, cake-tasters could obtain a generous shot of milk, which paired perfectly with any of the cakes up for a sample.

The evening wasn’t all about cake.

Carol Shad said simply, “God has blessed me with a castle on Earth.”

Tiwanna Holland spoke about youthful decisions, a daughter she loves, and finally, a home they can call their own.  Holland currently works with troubled youth to develop life skills.

Each of them beamed with pride of their accomplishment.  Habitat for Humanity is the epitome of a ‘hand up’ over a ‘hand-out.’  Each homeowner participates in the construction of their home.

Master of Ceremonies Billy Healis and Habitat for Humanity Assistant Executive Director Cindy Murphy began the introductions of the celebrity bakers, all while enjoying the time on the stage.

Hernando County Sheriff Al Nienhuis was the first on the stage with his K-9 cake in astonishing furry detail.  There was also a special guest appearance by K-9 Deputy Justice and his partner Stephen Miller.

No word on what happened to the traditional concoction of eggs, flour and frosting, baked by Hits 106 personalities Marvelous Marvin and John Kelly. But they did score some cash with a collection of Dewar’s scotch, a giant flask, and some nice coupons and gift certificates.

The Honorable Kurt Hitzemann reminded us all that time flies, but you may as well poke fun at it. None of us are getting out of here alive.

Newly elected County Clerk and Comptroller Doug Chorvat proudly displayed the seal of his office on a very-official looking sheet cake.  True to his apron, Chorvat did teach the crowd how to “Dougie.”

Speaking of houses, the Hardy Team was in the mix, showing their cake sporting the trademark RE/MAX hot-air balloon.

Senator Wilton Simpson was right on point with his ‘Foundation’ cake.  It takes a strong foundation to build a strong home, as well as the family who resides within.

Commanding attention as the legendary Hulk Hogan, attorney Matt Foreman of the Carter Foreman law firm presented his intricately decorated cake of milk and dark chocolate. We’re pretty sure it went to a respectable home, brother.

Totally causing everyone to wish for a fishing pole, kayak or just a cool deck with a tall lemonade, Kyle Tuttle and Chris Korbus displayed their Nature Coast cake, complete with river rocks.

From the Towne Square Mall, Richard Sanvenero and Walter Butler III came with their entourage; five cakes depicting superheroes.  The entire venue was safe on this night.