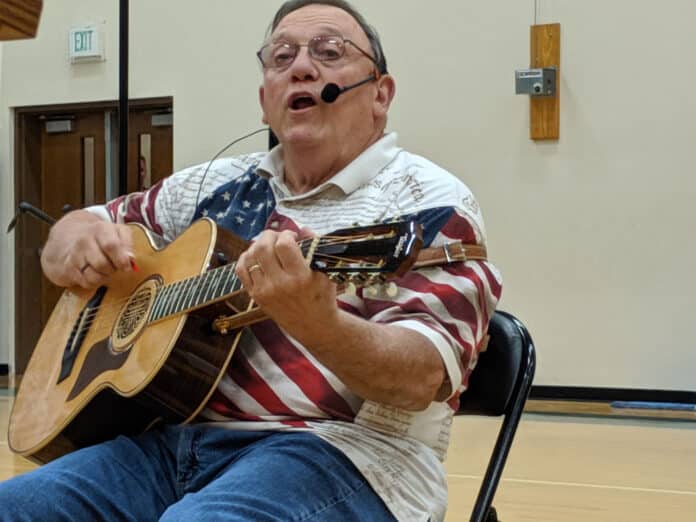 On Friday, May 24, 2019, students at Winding Waters K-8 assembled in the gym to hear award-winning essays by fellow classmates.   Introduced by Army Colonel Jerry Lambert of Timber Pines, the top essayists were awarded cash for their contributions.

The students of Winding Waters then heard first-hand accounts from those who served during wartime in the United States Armed Forces.

Distinguished Veterans of the community spoke to the students of their service.  Some stories were somber.  Some were uplifting.  All were told with the pride and deference that can only come from a United States Veteran of the Armed Forces.

Coast Guard Master Chief Jeff Shumate teaches algebra and coaches softball.  Before becoming a teacher, Shumate lost a Coast Guard brother while serving.  “People will thank me for my service,” Shumate began, “A lot of times when I hear that, I’m reminded that it’s me who is thankful … most importantly, I am thankful for the brothers and sisters who gave their lives for our freedoms, and for our country.”

“That’s what Memorial Day is all about.”

Shumate then spoke of the loss of Chief Petty Officer Nathan Bruckenthal during a suicide bombing attack in the Persian Gulf.  He was 24 years old.  He was survived by his wife and newborn baby.

Tom Hajdu served in Vietnam as an Artillery Specialist with the Army from 1969-1970.  “There’s a saying that ‘Freedom’s not free’,” Hajdu began.  “(On Memorial Day), we’re honoring those who made the ultimate sacrifice … we need to make sure that we respect them and never, never, never forget them.”

Hajdu illustrated his service of firing on targets to disrupt enemy combatant’s supply chains and sleeping in underground bunkers to the crowd of pre-high school students. Most have parents who grew up in the nineties.

“There were many injuries, and some deaths,” Hajdu told the students. “Forged through battle, we all formed strong bonds with our fellow GIs. All of us have a brother of war.  Even now, many years later, we stay in contact with them, and remain friends forever.”

Before beginning a Veteran’s version of Leonard Cohen’s “Hallelujah,” he said, “While we’re at it, let’s not forget those who still serve in our armed forces, and protect us every day.”  Telling the story of any soldier in a song, interspersed with some laughter, the students joined in singing the traditional chorus.

Holcomb addressed visitors from the United Kingdom, who sat alongside himself and the other Veterans with a humorous opener.  Born and raised in Baltimore, MD, Holcomb roasted his UK friends for the 1814 burning of the White House and other Capitol structures. “You guys kicked our butts in the War of 1812.”  To the kids, he said, “They weren’t very nice,”  and gave a short recount of the events of that portion of history.

The Washington DC area has never been known for hurricane landfalls.  However, while the White House was on fire, a hurricane blew through the Capitol, spawning tornadoes and torrential rain that quickly quenched the fire. “Back then, they called that ‘Divine Providence’…We’re friends now.”

The visitors from the UK all shared another common distinction; they were the same ages of the Winding Waters students when Nazis began bombing England during World War II.

Lightening the mood with a few laughs, Holcomb asked of the students, “Who are the shortest people in your class?”  Several hands were raised, followed by a rumble of laughter and applause.  Recalling his own school experiences, Holcomb told the kids that he wasn’t very tall in his youth, so he worked harder at playing sports such as basketball, rather than avoiding them entirely.  That attitude followed him into adulthood.

His lesson for the students was that superficial attributes can be successfully overcome.

Holcomb was deployed in June 2016.  “June in the middle east,” Holcomb described,  “A good day is 115 (degrees), a bad day is like 140 … but it was a comprehensive campaign to crush ISIS – the Islamic State of Iraq and Syria … one of the worst groups this world has ever seen.”

On a somber note, Holcomb told the story of a Navy Seal Chief William Owens.  Holcomb took on some of Owens’ duties after his death.

Vietnam Veteran Ron Caleb worked his way up to Sergeant after enlisting as a teenager in the Marine Corps in 1964.  He served until 1967, when an artillery shell landed inches from his feet.  Caleb recovered, raised a family and went on to run 29 marathons.

“The Vietnam war touched an entire generation in one way or another.  It especially touched those of us who endured those hill fights back in 1967 in Khe Sanh, and we saw some of our comrades killed.”   Caleb told the students that he knows exactly where to find his friend’s name on the Vietnam Memorial every time he visits it in Washington DC.

“I can speak for everybody here, that when you’ve been off to war, and come back… whenever you return, you love this country twice as much as when you left.