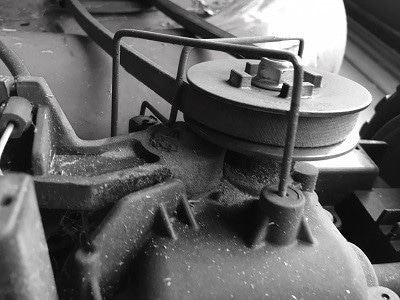 For the last five years at Old House, I had a self-propelled mower.  It worked great for the front lawn and westside strip of grass.  I simply walked behind it, and I often felt pulled.  But it was not as good for the east side of dog fencing and the AC unit, or my wife’s garden in the back.  For those areas, I had to teach myself to release the second handle so I could maneuver it in other ways without digging little trenches with the motorized wheels.

My front lawn at New House is so thick it’s like walking in snow: you have to lift your feet up.  I don’t understand it and I don’t like it.  And the S-P mower wouldn’t work like it was supposed to; I had to lean into it with stiff arms.  I thought maybe the belt was loose, so I looked online and found a video about it.  According to that, my brand of mower was an easy fix: the front cover could be removed simply by pulling the left and right sides off of clips, and the belt could be tightened with a wrench.  Not so my model.

Mine had nine bolts, two on top, and seven underneath, and after many breaks, I was finally able to examine the workings but couldn’t discover how to tighten it.  In desperation, I followed the cord up to see if I needed to unhook it and found a dial on the handle.  That was my finest DUH moment ever (though it is subject to change in the future and form new memories of the past).  I turned the dial as far is it would go to make it tauter, but still, I had to shove.

And somewhere along the way, I permanently misplaced the bag for the S-P.  The one thing a thick lawn doesn’t need is more mulching, so I got a regular mower, a 21-inch push.  I’m astonished at how light-weight it is, and I can roll it back without it turning into a tiller.  Most happily I can swing it around my wife’s New Garden, which is not as labyrinthine as the old one, but she’s working on it.

However, this isn’t just about mowers.  One day at Exwork an Assmag wanted to know what my motivation was, and I told him I was self-propelled.  Sure, I had just hung up some S-Ps for display so it was on my mind, but since then that’s been my euphemism for self-motivated.

When I was little, my mother was my motivation, what propelled me.  She got me up, told me what to do, and put me to bed.  She also used to nod at me to make me start nodding so I would agree to whatever she was saying.  Occasionally she’d shake her head as she explained why I didn’t want to do something, and I mimicked her in total acceptance that it shouldn’t be done.  (An anchor on MSNBC does something similar, mainly shaking her head, and is why I can’t watch Morning Joe.)  I think I was six or seven when I realized what Mom was doing, and one day when she was nodding, I shook my head and argued my case about not wanting to do whatever it was.  I don’t remember the circumstances, but I do recall the revelation that it was a trick, and thereafter I sometimes disagreed with her even when it was something I agreed with.  Not long later she stopped doing that.  Oh, she still told me what to do, but she was never sneaky about it.  And I had asserted myself.

I was self-propelled in high school, pretty much, but I think that was mainly from numbing repetition.  I was more self-propelled in the military because the threat of getting in a whole lot of adult trouble if I didn’t show up reinforced my motivation, or “propelation” (new word alert!)  My finest time was at Exwork.  There was always so much to do, and I had learned to do so much of it that no two days were the same, and sometimes no two hours were the same.  It was easy to propel myself.

Now?  It takes no propelation at all to watch TV.  So I propelavate (verb of new word) by writing and hanging out with my friend, Senor Cargador.  When we visit Exwork and people ask us what we do now that we’re “retired,” I tell them, “First we have coffee at Wawa.  Then we have coffee at his house.  A little later we have coffee at Exwork, often with Frauline Alles-Uberal. Then after lunch, we have coffee at my house.  And after that, we head over to Circle K for coffee.  There’s a lot of smoking.”

That’s an exaggeration of our daily routine, but it’s an accurate description of what happens weekly.  It’s how I stay self-propelled.