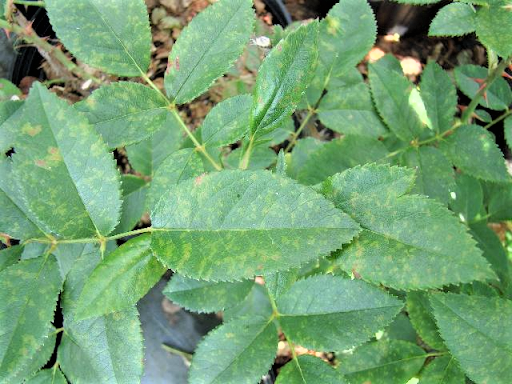 Florida weather is democratizing in a way; whether you’ve lived here your whole life or just arrived, it can always surprise you. Case in point: this has been a very wet spring for a narrow band stretching from Brooksville to the Cape, and this consistent moisture combined with cool nighttime temperatures explains why I’ve been seeing quite a few outbreaks of one of the nastier pest fungi out there: downy mildew. Downy mildew is a water mold, which is a very special type of fungus that is actually able to swim to find its host. Symptoms tend to first show up in new growth. Sections of the leaf between the veins will begin to turn a lighter shade of green, and if you shine a flashlight behind the leaf you’ll see the thinning sections of the leaf clearly. Overall it’ll be a mosaic pattern, resembling lighter-stained sections of a stained glass window. On the underside of the leaf, the light spots may appear to be water-soaked and a light fuzzy material may be apparent. Eventually, these sections of leaf will turn brown and die and the plant will follow suit without intervention.

To prevent the conditions in which downy mildew thrives, we need to take a few steps. First, when planting, ensure that plants aren’t crowded. Crowding minimizes airflow and increases humidity and, since both fungi and bacteria love humid conditions, this is one reason why over-planting can decrease yields.  Second, avoid overhead irrigation. Downy mildew reproduces using spores which can use the splashing drops to move between plants. These spores can also hitch a ride on your pruning shears so be sure to clean and disinfect your tools between plants (a 10% bleach solution will suffice). Last but certainly not least is plant selection. Choose resistant varieties, but also don’t plant the same thing in the same place if you had an infection last year. Downy mildew is plant host specific, meaning each plant, or family of plants, has a specific strain of downy mildew that attacks it. For example, hop downy mildew only attacks hops and cucurbit downy mildew only attacks cucurbits (cucumber, watermelon, etc.). Florida’s winters are warm enough for the fungus to survive into the next planting season, so unless you’re confident that you disposed of all infected plant material from last season, consider planting something new this year.

As homeowners, the best way to tackle downy mildew is prevention and, despite some misconceptions, smart preventative fungicide use is a key part of an integrated pest management strategy. As a homeowner, you are mainly limited to fungicides containing copper or chlorothalonil. These will not cure the fungus but they will help prevent it from gaining a foothold or spreading if it’s already arrived. Keep an eye on the weather forecast and spray according to the label when conditions look favorable for fungal development. The label will also instruct you on how often you need to rotate into another fungicide. While it may seem tempting to only buy one product, downy mildew is quite capable of developing fungicide resistance, which is great for the fungus and terrible for your harvest dinner plans. At the end of the day, if you take the time to create an environment which is beneficial to the plants you want and hostile to pests, you can focus your energy on more pressing matters, like what to do with a certain cable channel subscription now that winter’s long gone.

The University of Florida is an equal opportunity institution.