‘Guardian of the Glades’ 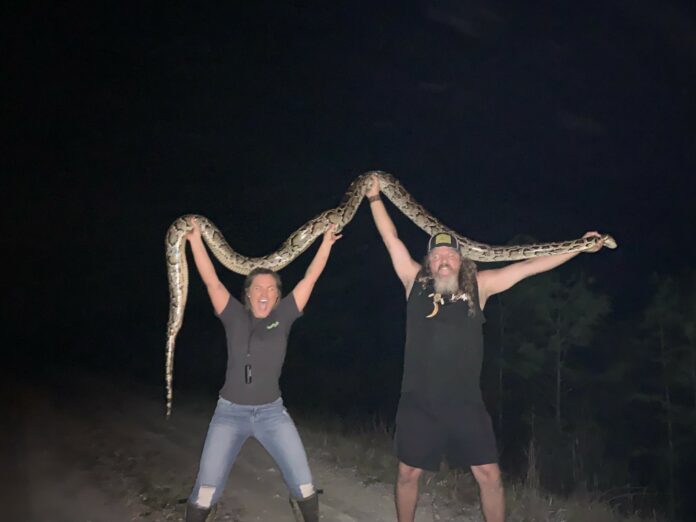 Funny how life works out sometimes, isn’t it?  For instance, last Friday began as any other with a handful of household chores, later a few odd jobs around the farm.  But by midnight, I was standing in the middle of the Everglades with the star of Discovery channel’s newest hit show, Guardians of the Glades, the Wildman, Dusty Crum…. with a fourteen foot python over my shoulders and peeing down my back.

That’s right, I’d received a rare invitation to follow Dusty on his hunt for the invasive Burmese pythons which are destroying the fragile ecosystem of our Everglades.  Along with Dusty was his lovely girlfriend Natalee McKinney and fellow member of the South Florida Water Management District’s, Python Eradication Program and expert snake hunter, Greg Morris.  And to round out our quintet of snake spotters, I had been joined by my favorite outdoorsman, Miss Meghan Bailes.  We met up in Ochopee, Florida, (a town so small that even after having been there twice, I’m still not sure where it’s at) at sunset and began preparation for the night’s hunt.

In no time we were travelling into the heart of Seminole country aboard Dusty’s highly customized python hunting truck. Dusty and Greg took seats on opposite ends of extension hanging well out over the side of the truck allowing them great views of the hunt ground while Meghan rode atop of the cab in a lawnchair wielding a spotlight.  For the first half of the night Natalee drove and afforded me time to get to know her and ask a million questions about the show and the state of the Everglades.

“The Everglades are dying,” she told me directly.  “There used to be a ton of wildlife out here. When we first began hunting full time for the South Florida Water Management District, we’d see deer and wild hogs up and down the levee.  But, they’re all gone. Even the raccoons and possums, the rabbits and even field rats have all disappeared because the Burmese pythons have eaten them all.”

I mentioned the alligators, whose eyes shown all about each stretch of open water we came across.  “Sure, there’s a lot of alligators, but the pythons still eat them too.  They are on the hunt constantly for food and given an opportunity a gator will be attacked.”

“If you notice, all of the gators are pretty skinny,” she continued.  “Way underweight for their length.  The pythons are eating up all of their food sources and they are being starved.”

Around midnight Dusty and Meghan spotted our first snake of the night and the easy-going, soft-spoken Dusty immediately went into “Wildman Mode” and after professionally assessing the situation, charged into the swamp and wrestled into submission a fourteen-foot long, female Burmese python. Dusty was all business and intent that that snake was not going to get away. Greg was at his side to ensure the coils didn’t get too tight as Dusty rolled about the underbrush with a death grip on the giant reptile.

Soon, the snake gave up and Dusty carried it up onto the roadway for a round of photographs and celebration.  Afterwards, the snake was bagged and stowed away on the truck and we headed off again for the next one.

A total of three pythons found their way into Dusty’s truck that day and and night, each to be euthanized humanely and processed for the skins and meat.  During the second half of the night, Dusty drove and allowed me time to pick his brain about the show and his job helping clean up the python invasion and I’ll tell you all about that, next week.

As always, if you have any feedback, suggestions or even just want to share a good hunting story, give me a shout at [email protected]  God bless and good hunting!