The Tampa Bay Times’ Other Newspapers 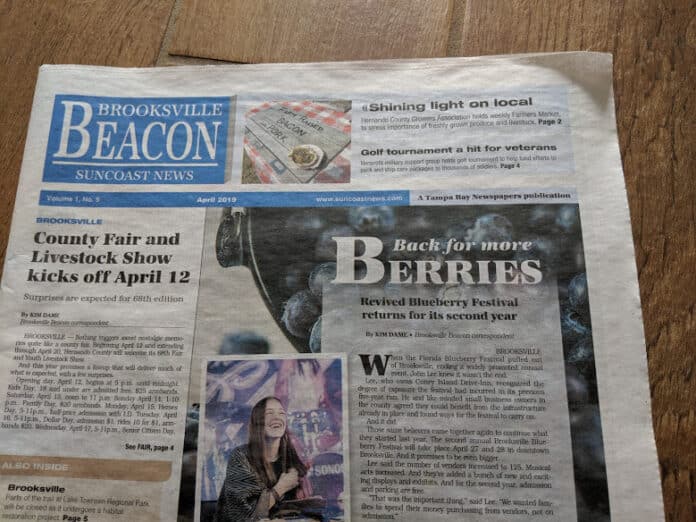 When the Tampa Bay Times purchased and closed the Tampa Tribune Paul Tash said in the Times “the Times also will continue operation of several other properties previously owned by the Tribune: … the Suncoast News, weekly newspapers serving west Pasco and North Pinellas counties.”

From a business standpoint this makes sense, the Times’ free newspaper product produces a higher circulation and edges out competition from startup newspapers. Many community newspapers start out as free publications and as their ad sales and circulation increase they able to charge for their newspaper.

This practice is counter intuitive to the motto of the Poynter Institute, owner of the Tampa Bay Times.  Their motto is, “Democracy needs journalism. Journalism needs Poynter.”  With such a motto, the Poynter Institute should undertake efforts to grow the diversity of news sources, not monopolize the market whereby eliminating valuable news sources.

It is important to know who owns and funds a news source. A diversity of sources is often used as an indicator of whether or not something is true. If all of your sources are newspapers controlled by the same people then you only have one source of information.

The Hernando Sun is owned by the paper’s co-publisher Julie Maglio with the support of her husband Rocco Maglio (co-publisher) and four children.   “It is truly a family owned business with our children stuffing envelopes, bagging newspapers, verifying mailings, pulling data from the web, and helping out in other ways.  Our team of writers, photographers, ad reps and distributors help us produce an amazing product each week,” said Julie Maglio.

We are working hard to maintain another news source within the county, which was recently described as a ‘news desert’ by the Tokyo Shimbun, a Japanese newspaper with a circulation of 3 million.