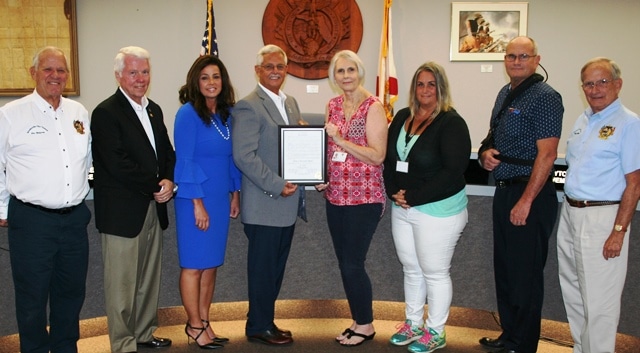 Sunrise Consulting’s Shawn Foster, accompanied by Sam Wagoner, discussed the recently concluded Legislative Session.  Foster reported that while last year’s budget was impacted by the Parkland shooting; this year, it was affected by hurricane Michael.  Another issue was the low reserves (27 days) that the State of Florida carried, putting the State at risk of losing its bond rating.

Foster explained the work Sunrise Consulting did in preparation for the Legislative Session, including weekly meetings and calls during Committee Weeks. Committee Weeks begin in September for the next session.

Brooksville is one of 48 other municipalities that requested funding for their fire departments. It was approved by the House and Senate. However, Governor DeSantis vetoed all but three of the requests. His criteria, unknown at the time of the session, was to award the money to fiscally restrained counties.

Of the thousands of bills and amendments filed during the Legislative Session, only 196 (5.5%) passed both chambers and made it to the Governor’s desk. Governor DeSantis has vetoed two so far. One gives some insight into his feelings on home rule. It was known as the “straw bill.” (The legislature wanted to restrict cities and counties from passing ordinances banning the use of straws.)

Wagoner said the bills that were passed impact cities. The bills in their original forms from the House of Representatives would have restricted cities or required more oversight. By the time they cleared the Senate and reached the governor’s desk, the impact to the cities was reduced.

One bill requires any tax increase referendum to be placed on a November ballot. This will allow more voter participation.
Foster and Wagoner expect the next Legislative Session to revisit these issues: plastic straws, red light cameras, vacation rentals, motorized scooters, and fertilizer/business licenses. Foster said the legislators may also discuss a requirement for millage rate increases (ad valorem taxes) to be moved to November ballots. The 2020 Legislative Session will be held 01/14/20 – 03/13/20.

Bills are already being submitted and committees will start discussions in September. Foster suggested meeting with Senator Wilton Simpson and his staff within the next few weeks to discuss any legislation that would impact Brooksville and to plan funding requests that are more likely to be approved.

Battista referenced the funding approved for Citrus County which included a splash park and county road widening project. DOT funding is separate from the funding requests, but Wagoner agreed that the money for parks was unexpected since there is no state-wide impact. Senator Simpson represents Pasco County as well, and it did not receive the funding it requested either.

Bernardini asked about septic/sewer funding. The State is reviewing the projects across the state, and much of the funding was sent to South Florida. Kemerer asked if the City’s approach should change and include engineering reports and a line item budget. Foster agreed, saying that was one reason a request for Hernando County School Board was rejected.

Second reading of Ordinance No. 906 – Franchise agreement with TECO/Peoples Gas – City Clerk Jennifer Battista read the headnote of the ordinance. City Attorney Nancy Stuparich explained the reason for the new ordinance. Discussions were held after the first reading at the 06/17/19 meeting.
Jimmy Adcock, Regional Manager for West Florida (TECO/Peoples Gas), made a formal request for a continuance to review changes. Stuparich said the second reading can be held on 07/15/19.
There was no public comment on this item. Brayton moved to continue the Second Reading to 07/15/19. Bernardini seconded the motion. The motion was passed 5-0.

City Planner Steve Gouldman explained that the owner of the 3.4 acre property,  Robert E. Bodiford, Jr.,  would like the land use to be changed from Combined Planned Development Project to C-2, commercial land use. The property is located on the south side of West

Jefferson Street approximately 1,412 feet east of the Cortez Boulevard/Jefferson Street intersection.
The original designation included housing and commercial development for this property and the adjoining 44 acres. After reviewing the application, the Planning and Zoning Commission agreed with the staff recommendation for the land use change.

The applicant’s agent, Walter (Buddy) Selph, said the intended use will not be a 100,000+ square foot shopping center at the location. It would be much smaller. Council members had no questions for Selph. There was no public comment.
Brayton made a motion to approve the first reading. Erhard seconded the motion. Brayton amended the motion to include the date of the second reading, 07/15/19. Erhard seconded the amended motion. Stuparich read the ordinance headnote. By roll call vote, the first reading was approved.

Approval of contract with Civic Plus in the amount of $11,000, ($2,000 for annual maintenance and $9,000 for website design and authorize execution by the Mayor.  Battista moved to approve this item. Bernardini seconded the motion. The item was approved with a 5-0 vote.

Council member Erhard asked City manager Mark Kutney to summarize the selection process, list the committee members, and explain the reasons for choosing the six firms who were given contracts.

Eighteen firms responded, and eight were asked to provide a presentation. Six of the eight received good, close scores and the committee recommended the six firms to the council. Three of the firms are local. The firms will be used as part of a rotation unless a task is specialized, and one firm is a better choice.

Brayton moved to approve the staff recommendations of the six firms: Applied Sciences, Cardno,
Coastal Engineering, CPWG, DRMP and  Pro-Civil 360.  Bernardini seconded the motion. The contracts were approved with a 5-0 vote.