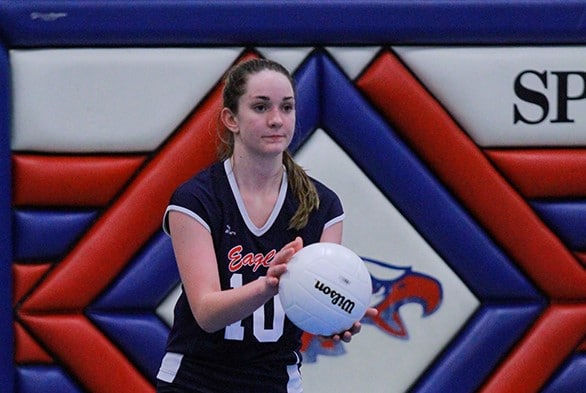 Springstead High School has announced the hiring of Andrea Kneser as the school’s next volleyball head coach, per an announcement by the school on Twitter a couple weeks ago.

“Thrilled to be able to bring someone with her enthusiasm,  organization and experience as a player, coach and commissioner,” Springstead athletic director Dustin Kupcik said.

The Eagles were 16-5 two years ago (2017) heading into the district semifinals before losing to Land O’ Lakes. Springstead had to relive a similar ending this time around in 2018 and fell to Sunlake in the Class 7A, District 8 tournament and ended the season at 12-14. Kneser replaces Kyra Leonard as the head coach for the program.

Expectations were not quite as high from what they were from the 2017 campaign after finishing just four wins short of 20, so many expected a little bit of a rebuild for the Eagles. The Eagles ended up finishing behind Sunlake, Mitchell and Land O’ Lakes, respectively. A tough district schedule coincided with the team’s 1-5 mark within 7A-8.

Leading the team in kills on the season was junior Jennifer Aten, who ended the 2018 campaign with 465. Aten also led in a couple other key categories, including assists (87) and digs (411). Fellow junior Olivia Deloach contributed 93 kills on the season.

It’s that time of the year when flag football takes over the scene throughout the area and Spring Hill’s summer flag football season will be starting up again this week. The league is just in its second week of play, as teams were held back from playing because of weather cancellations.

The Hernando County flag football league will have Week 2 begin this Friday, as the league will has around 10 teams. Games take place on Friday evenings at Veterans Memorial Park 12254 Spring Hill Dr Spring Hill, FL 34609.