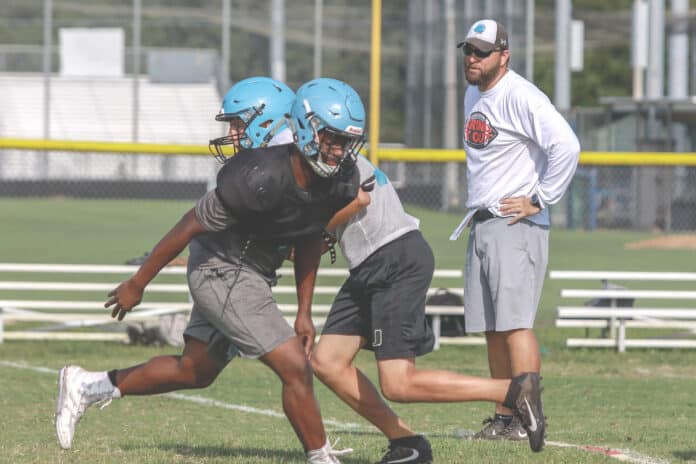 BROOKSVILLE, Fla. —- The weather in this part of the state of Florida, is unpredictable, it could be raining hard but just wait a minute because the storm will pass and the promise of a sunny day is waiting.

Like the weather, this year’s football season for Nature Coast Technical High School is going to be unpredictable.

The excitement of a new beginning, for players and coaches; it is the best time of the season and really who does not like the feel of something brand new?

Forgotten is the heartbreak of last season. In the past are the mistakes which are long gone and that is the beauty of this time of the football season.

High school football fans are eagerly awaiting the start of Nature Coast Technical’s football season as we’ll get to see how the competition for quarterback plays out.

Last year’s starting quarterback Fabian Burnett Jr. and Vaughn Sykora who transferred from Weeki Wachee High School give the Sharks a couple of options at quarterback.

Nature Coast Technical football coach Cory Johns believes that there is nothing wrong with healthy competition.

“Competition never hurt anyone and they are battling for it,” Johns said. “Burnett made us dangerous last year, he has been a starter for the last two years and he knows the offense. Both will play some throughout the season but will see who ends up winning the job.”

Burnett led his team to the FHSAA Class 5A, Region II final where they faced Citrus North Marion, but lost on a last-second field goal attempt.

Burnett produced 1,801 yards of total offense for the Sharks and scored 22 touchdowns for his team without turning over the football.

Sykora threw for 1,785 yards and 21 touchdowns, for the Hornets last year but this is a new season and he is with a new team.

Johns describes his offense as a multiple-style kind of offense, the Sharks will run a Wing-T, a little I-formation, they will also run an empty backfield, spread, quads, and trips. It is just different looks with formations with the purpose of establishing the edges of the line of scrimmage.

Johns had the offense working hard under the Florida morning sun but he said that this team has already established a personality.

“They have fun but they are able to most of the time focus on practice,” Johns said. “Come out with intensity and quickness especially without pads on, it is a hard thing to do to practice fast without pads.”

The offensive line is going to be a key ingredient to establish the offense for the Sharks, the group is led by guard Andre Dillard. The plan is simple enough: the Sharks’ offense wants to establish the edge of the line of scrimmage.

A solid running game will be able to help the passing game, which is also looking to control the edges of the line of scrimmage.

Johns said that 11 starters will be back on defense and he is optimistic about the defense because in the spring game his defense only allowed 63 yards and no points.

The defensive line is big and can move across the line of scrimmage in a hurry and according to Johns are pretty good.

“Defense- we are probably further along than our offense,” Johns said. “They have progressed more than I thought that they would. We went to a team camp and scrimmaged other people two weeks ago that gave us a kind of an edge for us. They are ahead of where I expected them to be.”

Nature Coast Technical starts the season Friday night August 16, with a road trip to Sarasota, the game is scheduled to start at 7:30 p.m.

Johns is hoping that his team remains focus but are ready to have fun playing the game of football.  He hopes his team will be as unpredictable to the Sarasota defense as the Florida weather.