Lilyan gets her garbage bin 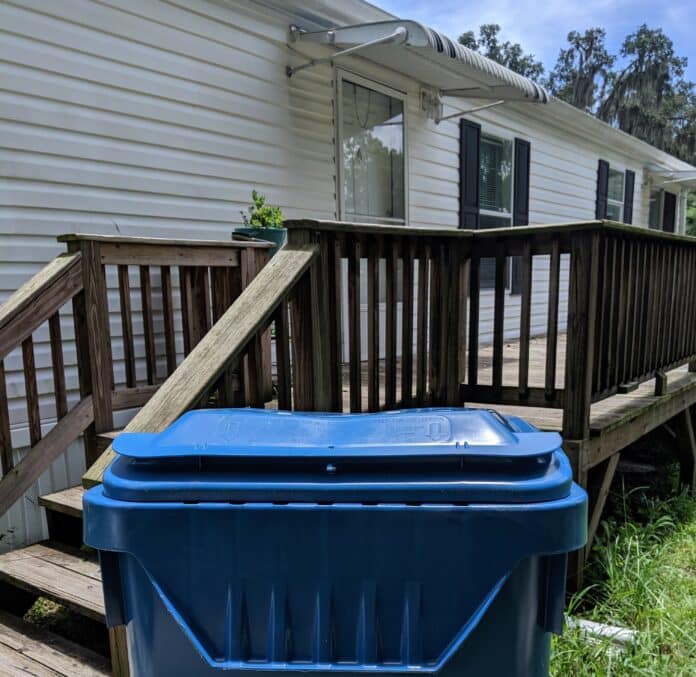 by JULIE B. MAGLIO
[email protected]

(Aug. 1, 2019) Garbage pickup is very important.  When it suddenly stops, it can be frustrating for anybody, but it’s even worse for elderly or disabled residents who have trouble communicating, moving around or have a fragile state of health.

Lilyan Vannerson is 86 years old.  She speaks in a broken staccato manner, since she has trouble breathing.

She lives in a quiet, rural area of Hernando County on the property her parents purchased in 1949.  They were dairy farmers that moved up from Clearwater.
She happens to be my neighbor. I only met her last Thursday, when she phoned our office out of exasperation.

In the meantime, she paid others to take her trash to the dump for her.

I met with Lilyan and her caregiver later that day after she called our office.  It’s a bumpy ride on a country road out to her home.

We spoke again about her frustrating situation.  She was having a lot of difficulty getting out the words as she quickly became out of breath.  The subject matter made her condition worse.

I asked if we could call Republic Services to find out additional information.  Mrs. Vannerson has their number saved in her phone contacts and easily made the call. She quickly became out of breath as she spoke to Denise, the customer service representative.  I cordially asked if we could record the conversation.

Denise at the Republic Services call center said that a manager had escalated the issue and Mrs. Vannerson would be receiving her trash bin the next day as it was scheduled for delivery.  Denise also explained that a credit had been applied to the account for non-service.  After the phone call ended,  Mrs. Vannerson said she did not expect to see a blue bin anytime soon as they told her every time she called that she’d be receiving one the next day.

I spoke with Lilyan a little longer and left hoping that she’d receive her trash bin soon.   I drove out along the bumpy road, back to the main road, but only got about halfway.  A truck was traveling towards me.  Probably her son who lives next door, I thought.  I pulled off the side of the road so the truck could go by.  As the truck approached alongside, a large trailer full of blue trash bins came into view and my heart practically leapt from my chest.  I pointed the driver towards Lilyan’s home and told him he’s just made an 86-year-old woman very happy.

I couldn’t resist driving back up to the house so I could see Lilyan’s reaction.  She was in disbelief, but extremely elated.

“I can’t believe it, Julie,” she said.  She also thanked me, but I told her that I didn’t think I had anything to do with it.  “Come back and visit me sometime,” she asked.  I said, “Of course, we’re neighbors.”