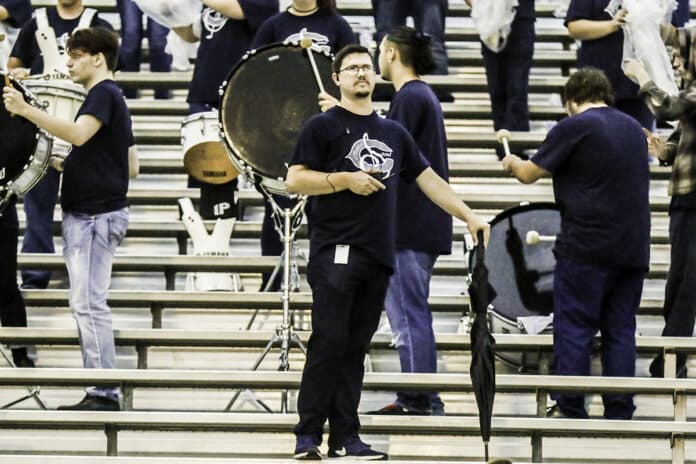 Steven Schildbach aims to inspire his students to weave the magic of music into their everyday life.

He left home to attend Florida State University and now holds a degree from the International Institute of Design and Technology which allows him to continue with the family business of teaching. He also has a chance to do something that he loves – leading the high school band as the new Central High School Band Director.

Schildbach came home to a place that holds a special memory complete with the faded echoes of laughter and with some bitter-sweet tears but all of that now-is just ancient history.

There is a hidden corner of Central High School, where there is a class room, which is peaceful most of the time. That is until a group of young women and young men, open the door, turn on the light and invade the room. Then all of that tranquility and calmness vanishes from the room.

The atmosphere inside that room becomes alive with the noise of students talking, laughing and then the sweet sound of music rises up toward the ceiling, causing the tiles to vibrate just a little.

That is the kind of enthusiasm on display from inside that room, which is exactly what Schildbach wants to hear and witness from his students.

When Schildbach was a student and a member of the band, playing the tuba and percussion, his band director John Schnettler, became his mentor.

Schnettler’s approach was a simple philosophy which Schildbach is now employing as the new band director at Central High School.

Schnetter wanted his students that played in the band to envelop the journey of school and enjoy their life but also leave room to appreciate music.

“He had a lot of energy, he made it fun, you could tell that he loved what he was doing,” Schildbach said, describing Schnettler’s philosophy. “I hope that they get the same type of experience that I had to inspire them to become band director or play music.”

That is the same philosophy that Schildbach took from his teacher and shares with his young musicians. He aims to inspire his students to continue to weave the magic of music into their everyday life.

He wants his students to accept and embrace their talent, appreciate the old tradition yet explore and create new band traditions.

Schildbach says he reminds his band members that it is important to give back to your school and be a part of the community.

Like the football team, the Central High School Marching Band practices hard to get every routine correct, making sure that every step is made in time with every note of the music, which is done with complete precision.

“They are not non-athletic, they are not geeks and they are athletes,” Schildbach said, describing the members of the marching band. “I want to make sure that the band members love the program.”

The music from the band was not heard until Bonko resurrected the program in November 2015, and he brought the thunder of the drum line back onto the football field and inside that special corner classroom inside Central High School.

Schildbach is dedicated to keep the music alive, he will direct the band to find the beat and stay on time, keep the melody in key and he will keep the band marching at Central High School-he is the music man!