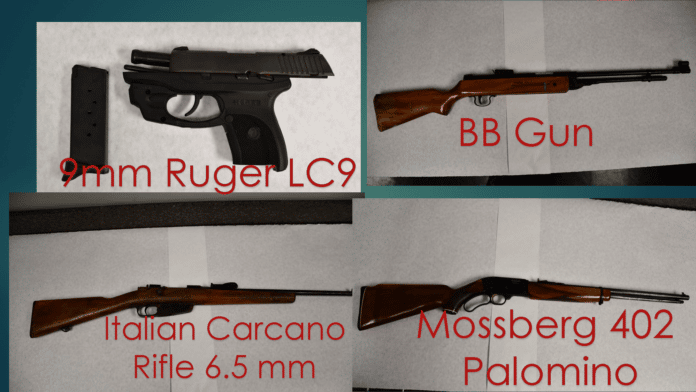 At a press conference held on Sept. 6, 2019, HCSO Sheriff Al Nienhuis, together with School Superintendent John Stratton and Major Crimes Detectives had additional information on the series of events that led to the lockdown of several schools on Sept. 5, 2019.

No students were threatened, and no shots were fired during the incident.

All 5 male suspects are juveniles, and students at Hernando High School.

A 15 year old student allegedly stole a 9mm Ruger 9mm LC9 from a relative, with the intention of selling the firearm to a fellow student at Hernando High School. While on the school bus, this student asked another student, aged 16 to hold the weapon for him, and that they would meet after a study hall period.

Later in the day, the two met with three other students (aged 17) inside a bathroom at the school to conduct the sale.  Nienhuis reported that the student who was to purchase the weapon, “racked the gun a few times … then the three (the intended buyer and two accompanying him) … all run out of the bathroom with the gun.”  The investigation determined that it was the purchaser’s intent to steal the weapon.

As the investigation progressed, HCSO deputies recovered the weapon at a home frequented by the student who intended to buy the gun.  According to arrest reports, he “played with the handgun a little bit, turning on the laser” before concealing it between the mattress and box spring of a bed he used while at the home.   HCSO deputies also recovered three other weapons under the mattress:  a BB Gun, an Italian Carcano Rifle 6.5 mm, and a Mossberg 402 Palomino.

There was no information about the other weapons available at the press conference.

Nienhuis credited an alert parent with alerting School Resource Deputy Pope, whose fast action led to seven HCSO units arriving at HHS within four minutes. Ten minutes later, ten more units arrived.  Ten minutes after that, two of the suspects were in custody.  By the time the other three were taken into custody, 22 HCSO units, including Major Case Detectives had responded to the school.

Of Deputy Pope, Nienhuis said, “If it weren’t for him, we’d probably still be investigating this.”

The parents of all the suspects were reported to be cooperative.

The 15 year old who originally stole the weapon is charged with grand theft of a firearm and possession or discharging a firearm on school property.

The 16 year old who received the gun from the 15 year old and carried it into the school until the exchange was made is charged with possession or discharging a firearm on school property.

The 17 year old who was to be the primary buyer is charged with grand theft of a firearm and possession or discharging a firearm on school property.

The two other 17 year olds who accompanied the primary buyer are changed with principle to grand theft of a firearm and possession or discharging a firearm on school property.

Nienhuis could not speculate on the intentions of the suspects.  “It’s frustrating, but kids are going to do things that are not the brightest … It may be a case of wanting to do something bad, or it may be ‘forbidden fruit’ or it’s exciting to have a gun.  We don’t know what their true intentions were.  We live in a society where weapons are accessible.  It’s part of being in a free society.”

Superintendent John Stratton stated that the district is continually assessing school safety, however could not comment specifically on future security measures.

Stratton added that the school district will seek expulsion of all five suspects.  Speaking to the public at large, Stratton said, “Do not make these decisions.  Do not bring a weapon on campus.  Don’t make threats.  Serious consequences are going to be the result of that.”