HomeUncategorizedHornets dominate Sharks in mid-season match, but that’s not the whole story
Uncategorized

Hornets dominate Sharks in mid-season match, but that’s not the whole story 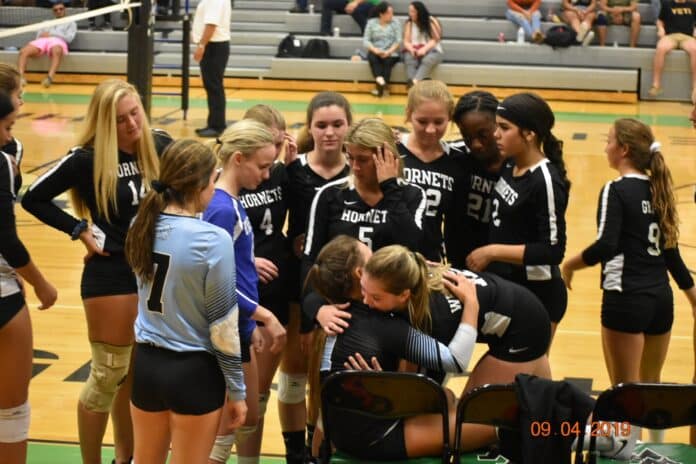 It was more than just another volleyball game on Wednesday Sept. 4.    During set three NCT Senior setter Karla Cantero-Garcia sustained an ankle injury.  The entire Weeki Wachee team came over to her bench console her. “An act like this displays that a camaraderie exists in the volleyball world between the girls regardless of who or where they play, even more important than the win or loss column,” said Martin Colleran, who was in attendance.  A photo by Eileen Colleran of the Weeki Wachee team surrounding and consoling Cantero-Garcia went viral after the game.

Weeki Wachee made it to the regional quarterfinals on October 24 but lost to Fivay 3-0.

So it would be safe to say, all eyes are on Fivay towards the end of the season because both of these teams have one goal: regionals.  The Hornets have an advantage on October 8, 2019 when they face Fivay, with their set techniques, power spikers as well as dominating blockers. Overall NCT and Weeki Wachee will have to continue to be competitive, practice harder and smarter to qualify for district competitions.

“I stepped into a phenomenally talented team, and we went elite 8 two years back to back and sent six to eight girls to college who were extremely talented. I just didn’t have to get in the way, just do my job as a coach and let those girls go out and play. They did a fantastic job,” said Gore.

“We graduated a lot of great players. We have been rebuilding for a couple of years after that, but now we’ve got some great girls. They play a lot of volleyball, and they know the game. The way we were able to finish last season, winning a district title after all those years, we have to give credit to some of our top players: Matty Clark and Karla (Cantero-Garcia) as our setter. We had some great seniors last year. We are just hoping to continue that this year, find a way to win again, we would love to have back to back districts championships,” Gore said.

Coach Gore described the game against Weeki Wachee last week as shaky in the first two sets, which seemed like a replay of their preseason game back in August. The Sharks dominated the first set but couldn’t regain leadership after that. They lost 2-1.

“We had so many errors. It’s hard to win when you give the other team that many points, easy points. But the way we fought back in set three, and the way the girls kept fighting, I am extremely proud of the effort on that, but obviously, we have to play better. We can’t expect to win games if we are going to play with that many errors,” coach Gore said.

Karla Cantero-Garcia’s ankle injury in set 3 did not have any repercussions for NCT’s match against Central on Thursday Sept. 5 as NCT won 3-0.  They face their rival Springstead on Sept. 9.

Beginning in 2013, Hornets head coach Kelly Werkmeister pretty much built the volleyball program from the ground up.  “Just building every year. We try to stay strong and get ready is our biggest thing,” Werkmeister said.

Due to Hurricane Dorian, there are some make-up games needed to complete the season overall.