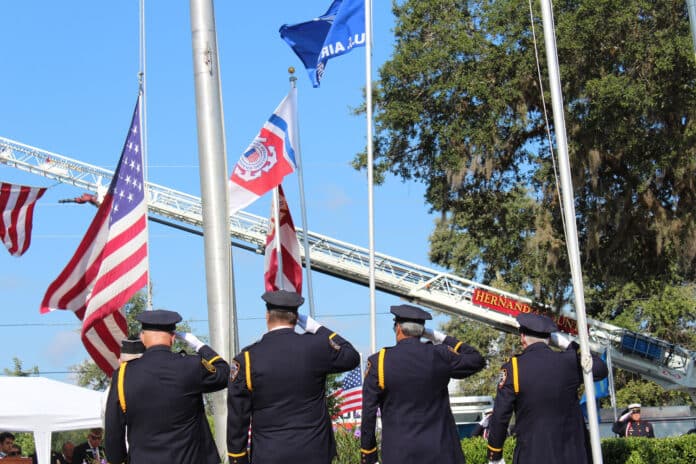 SPRING HILL- It does not take a large crowd of people in Hernando County to find someone who was deeply affected by the attacks on September 11, 2001. We have residents who worked in the buildings, others who lost relatives and friends. Many of our residents are from the New York area and still have family and friends living there.

The Veterans of Foreign Wars post near Anderson Snow Park has a September 11th memorial which contains iron from the World Trade Center, tile from the pentagon, and soil from Shanksville, Pennsylvania where Flight 93 crashed.

On September 11th, a remembrance is held around the memorial. Wreaths are laid at the memorial honoring those who sacrificed so much on that day 18 years ago. The memorial service was spearheaded by FDNY retired firefighters of Spring Hill Chapter 343.

The remembrance was well attended with over a hundred people gathered in solidarity. Many local dignitaries from both the county government and the school district participated. Students from two local schools: Wider Horizons and Notre Dame Catholic School sang patriotic songs at the ceremony. Governor Ron DeSantis sent a heartfelt letter which was read by Sheriff Al Nienhuis.

The Hernando County Firefighters assisted in the memorial service with a ladder truck raising a giant American flag as a backdrop for the ceremony. The VFW and firefighter color guards lowered the flag to half staff to remember the victims of the September 11th attacks.