Springstead football is county best at 3-0 to start season 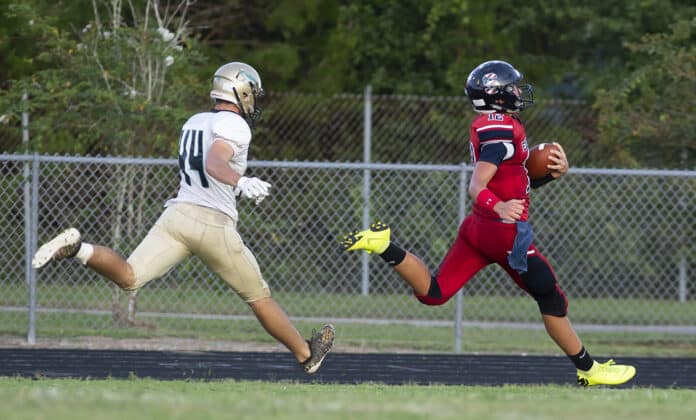 SPRING HILL- If you had told most folks around Hernando County that the best team through three games would be Springstead, some might have given you a double take.

The Eagles, who didn’t make the playoffs last season, had teams like Nature Coast and Hernando, to leapfrog to earn the title of top club in the county. Springstead has certainly progressed and this season they look nearly unstoppable.

That’s the season so far for the Springstead Eagles’ varsity football team and they’re off to one of its most impressive starts in recent years. There’s a lot of reasons to like this team, as the return of running back Anthony Alexis has done the Eagles wonders for their run game.

Springstead’s home opener against Land O’ Lakes Sunlake was a prime example of what the Eagles’ run game can look like when it’s in full gear. The Eagles defeated the Seahawks soundly 53-0 and had 148 yards from Alexis. The quick footed tailback missed most of last season due to injury and has come onto the scene to be the team’s workhorse in the backfield.

Throw in the fact that Alexis is not the only threat in the backfield to watch for: the Eagles’ triple-option attack is deadlier than ever. Quarterback Max O’Rourke has been effectively throwing and running the football, as he has shown off his ability on the run. The right-hander pitcher has improved immensely running the ball and having command of the offense.

Offense hasn’t been the only area where the team has shown massive improvement. Springstead’s defense has pitched two shutouts this season against Sunlake and Weeki Wachee, out-scoring both teams 74-0 in two games. The Eagles also put up a great effort defensively when they faced rival Nature Coast in a battle for county supremacy.

Nature Coast (1-3) has been the county’s best team that past few years, but Springstead has finally been able to upend the Sharks in this year’s edition of the battle between Hernando’s best. Garofano’s club defeated the Sharks at ‘The Tank’ 30-19 and now have set-up an opportunity for the Eagles to quite possibly run the table for the rest of the season.

Springstead now will come off the bye week with a game against Crystal River before facing off versus a slew of winnable games down the stretch of the season. After facing the Pirates, Springstead will take on Dade City Pasco in a district matchup before the final five games coming against Hernando, Lecanto, Lake Minneola, Groveland South Lake and Central.

All the games on the regular season slate for Springstead and the Eagles face the very real possibility of running the table and going 10-0, but they must keep the focus of the task at hand. This team has a chance to be something very special, with players like Alexis, O’Rourke and Adrian Cabrera on the roster and Springstead knows it. Can the Eagles run off seven wins in a row? Time will only tell as the season moves along.