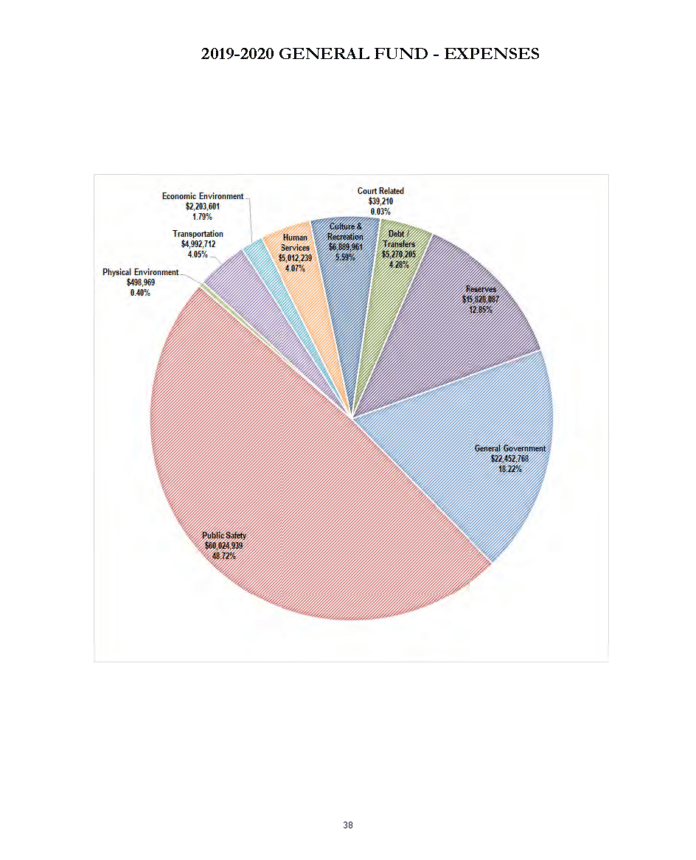 After a contentious 4 hour meeting on September 11, 2019, The Board of County Commissioners voted 3-2 to both approve the proposed 1 mill increase and the tentative budget.  Commissioners Steve Champion and Wayne Dukes opposed both measures maintaining that more expenses could be cut, rather than increasing the millage rate.

The tentative millage rate will apply only to the BOCC General Fund.  Other funds’ rates are listed as follows:

It was discussed that the millage increase alone is not the cure, and that the budget would not be sustainable.   Commissioner John Mitten stated he was in favor of the increase temporarily, but not as a permanent measure.

Commissioner John Allocco added that recent unfunded mandates “are killing us,” and recommended to the board that somehow the state legislature be made aware of this.

A second budget hearing is scheduled for September 24, 2019.

Budget Director Stephanie Russ reported that the General Fund Reserves would begin growing with a 1 mill increase on property taxes.  Russ’ presentation showed a continued decline without the increase.

Champion, who has spoken out previously opposing the millage increase said, “You mention you need the 1 mill in order to balance our budget, but you should also state, ‘Raise it 1 mill, or reduce expenses.’ Because it can be done reducing expenses, correct?”

County Administrator Jeff Rogers answered that $8.4 million would need to be cut from the budget to attain the same effect.  The importance of increasing the Reserve fund is a matter of board policy. Rogers reported that for Fiscal Year (FY) 2018-19, the reserve fund level was approved at 14.3%. County policy is to hold the Reserve Fund at 18.5%  This year, the current proposed Reserve Fund level is 16.3-16.5%

Champion countered, suggesting the removal of a $6 million increase over FY 2019.

Rogers explained that certain costs increase every year in the form of various insurances and retirement rates and that the control over those is outside of the county.  Concerned about the cutting of services, Rogers asked the dais what else could be cut.

Russ added that while expenses have increased, the revenue for the new fiscal year is also projected to increase.  She also reported that a significant portion of the expense reductions resulted from centralizing Technology Services under the Clerk of Court, and Hernando County Sheriff’s Office (HCSO) reducing expenses by $382,809.

Commissioner Wayne Dukes added that over $1 million was saved by staff reductions.  Also opposing the increased millage, Dukes said, “I think we can fix this without putting it on (the property owners). I don’t think it’s right.”

Champion later mentioned the possibility of a half-cent sales tax, which would reportedly net the county $10-12 million.  “That fixes everything,” Champion said. However, such an item would need to be a ballot referendum during the 2020 election.  “Do you think you’ll get a half-cent tax through … when you raise 17.2% on their millage? I think it would go down in flames.”

Finishing the presentation, Russ and Rogers showed that the budgets of most Constitutional Offices remained unchanged, with the exception of the Clerk of the Court, which absorbed the Technology Services department, and the Hernando County Sheriff’s Office (HCSO), showing significant increases.  HCSO’s budget coming out of the general fund went from $49,852,410 in FY 2019 to $56,287,539 for FY 2020.

Hernando County Sheriff Al Nienhuis spoke about HCSO’s budget, explaining that they have in fact increased revenues over his tenure.  Nienhuis reported that his office has also seen rising expenses that are out of their control, exceeding $3.1 million. These include:

Nienhuis also reported that $188,000 is expected for Hurricane Michael Reimbursement, and that those funds would be marked for the Reserve Fund.

In total, the highlights of the proposed budget include:

• Funded all increases to all state mandates

• Consolidated departments and made reductions to staffing

• Increase for all non-bargaining of 2.2% CPI

• Teamsters and Fire (IAFF) increased per contract;  step plus 2.2% CPI

Though the board has tried to avoid service cuts, Rogers also reported that further cuts would involve Libraries, Aquatic Services, and Cooperative Extension.

Numerous residents spoke during Citizen’s Comments.  Not one in favor of the millage increase.

Returning to the topic of a sales tax increase, Champion cautioned that less than 50% of county residents would be paying the extra property taxes, due to Homestead or other exemptions.  The sales tax would generate revenue from anyone purchasing goods in Hernando County. Champion also stated that he is also open to compromise.

Erick van Malssen of Stantec, the consulting firm advising the board, spoke briefly showing real-time models to diagnose the General Fund and offer solutions.  According to van Malssen, the 1 mill increase will “stop the bleeding” in 2020, however it is not a permanent solution. In another model, he showed that cutting expenses to remedy the deficit satisfactorily could result in the reduction of 100 jobs.

Van Malssen also reported that the number of property taxpayers would be closer to 60% of the property owners, and not the 40% reported earlier.

Another driving feature of deficit is the rate of growth, which is currently 5.5% “with great fiscal constraint.”  Reducing the government expense growth rate to 3% is partially helpful, however the model continues to show expenses exceeding revenues.

An initial model that projects to improve the cash hemorrhage as soon as 2021 would be to cut expenses by $6 million, and holding expenses and the growth rate at 3%, and not increasing property taxes.

“When you have bargaining agreements, I think that you’re locked into a 5% – 5.5% growth rate.  Let’s face it, when the majority of it is personnel, then the only way to achieve 3% is to… remove the positions.”

The sobering worst-case scenario, as reported by van Malssen in a prior meeting, when state officials sees a county depleting reserves at a rapid rate, “The state comes in, relieves everyone here of their jobs, and they do the hard work of slashing services and raising taxes until it’s fixed.”