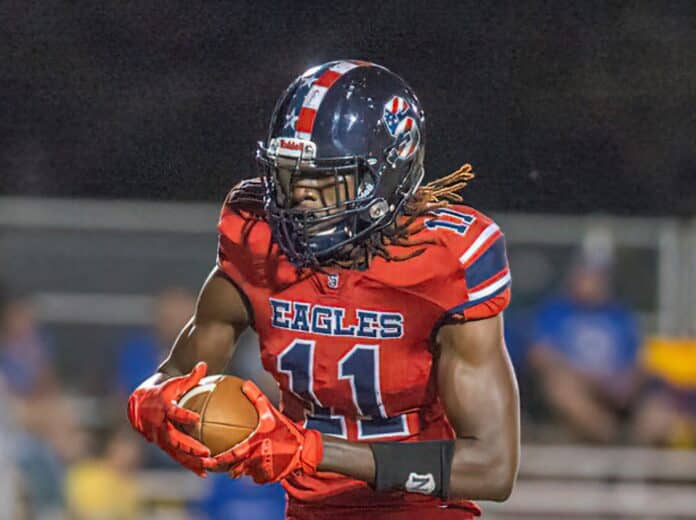 SPRING HILL- If there’s anything that this Springstead High School’s football team has shown this 2019 season, it’s resiliency.

Mike Garofano’s group has been tested week in and week out and the time came for the Eagles to answer the bell against a hungry Dade City Pasco team last Friday, hoping to bounce back from a 20-0 loss the previous week to St. Petersburg Dixie Hollins.

That redemption, however, would not come up against the Eagles. Springstead was able to play tough defensively and withstand a second half charge from Darrion Robinson and crew, as the Eagles came away with a narrow 10-3 victory at Booster Stadium in a Class 6A, District 5 matchup.

Springstead (5-0) now currently sits in the proverbial driver’s seat in 6A-5, but Garofano has warned his group to not look past any opponent upcoming as a potential 10-0 season looms in the distance.

“I believe this team is very capable (of going 10-0),” Garofano said after the win. “I hope the guys are not thinking down the road like that, though. I can only plan for our next opponent and focus on them and that’s Hernando. They’re our oldest rival in the county and we have homecoming coming up. We just have to keep these guys focused at the task at hand.”

The task currently at hand is finally reaching the playoffs after back-to-back 7-3 seasons in which Springstead had narrowly missed out on. Garofano has taken a group to the region final before and believes he may have the talent to make it happen again. Without linebacker Adrian Cabrera, Springstead was able to pull off another win.

Pasco (2-4) lost quarterback Devin Jernigan early in the contest after he suffered a foot injury, which the junior signal caller deemed could be season ending after the loss. The injury to Jernigan changed a lot for Pasco offensively, as they went to more of a ground-oriented attack led by Robinson, who switched over from his usual wide receiver spot.

The switch actually threw Springstead’s defense off guard, as Pasco’s offense began to find success on the ground between Robinson and running back Desmin Green. The duo started churning yards and the Pirates nearly went into halftime with the lead if not for a missed field goal attempt by kicker Julio Herrera.

Springstead’s offense finally got everything together for a drive in the third quarter, when quarterback Max O’Rourke would find running back Anthony Alexis on a short pass out of the backfield the tailback took it the rest of the way, going 42 yards for the game’s first touchdown. Armed with a 7-0 lead, the Eagles’ defense started to clamp down.

Eagles ended up taking on a field goal to increase their advantage to 10-0 before the Pirates finally got on the board late with a field goal of their own. It would be too little, too late for Pasco as Springstead was able to run out the rest of the clock after recovering the attempted onside kick.

Now heading into one of the season’s biggest games, Springstead will face a team very similar in regards to playing style. Hernando employs the same single-wing rushing attack like Springstead and likes to play with seven and eight players in the box. Both teams will attempt to establish the run game before trying any passes against the opposing secondary.