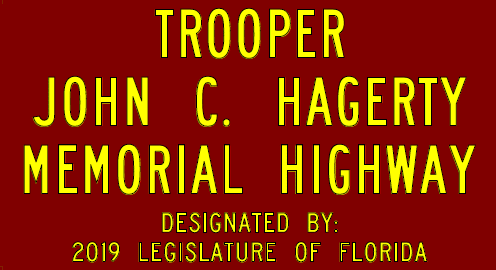 LAKELAND, Fla. – On October 9th, a portion of Interstate 4 between the 36 and 44 mileposts in Polk County will be renamed in remembrance of fallen Florida Highway Patrol Trooper John C. Hagerty.

Trooper Hagerty was a member of the Florida Highway Patrol who served the citizens of Florida for 13 years.  His career with FHP began on October 15, 1956, as a member of the 15th Recruit Class in Tallahassee.  His duty stations included Frostproof, Punta Gorda, Stuart, and Orlando.  On March 18, 1970, while piloting an FHP traffic aircraft over Interstate 4 near Lakeland, Trooper Hagerty, 44, was struck by a low-flying military aircraft and suffered fatal injuries.

“Paying tribute to Trooper Hagerty by renaming a portion of Interstate 4 in his honor is a great tribute,” said Colonel Gene Spaulding, Director of the Florida Highway Patrol. “Trooper Hagerty was dedicated to serving the residents and visitors of this state as a Florida Highway Patrol Trooper, and the ultimate sacrifice he paid is well-deserving of this recognition.”

The ceremony will be held at the Lake Florida Highway Patrol station located at 3247 Lakeland Hills Blvd, Lakeland, FL 33805 and will begin at 2:00 PM.

Leslie Stein
Leslie Stein has over 35 years experience as a Speech-Language Pathologist working with neurologically impaired adults. She received her undergraduate and graduate degrees at the University of South Florida in Speech Pathology.
Share
Facebook
Twitter
Email
Previous articleLetters to the editor published Oct. 4, 2019
Next articleA long ride home for the Sharks
RELATED ARTICLES
Uncategorized