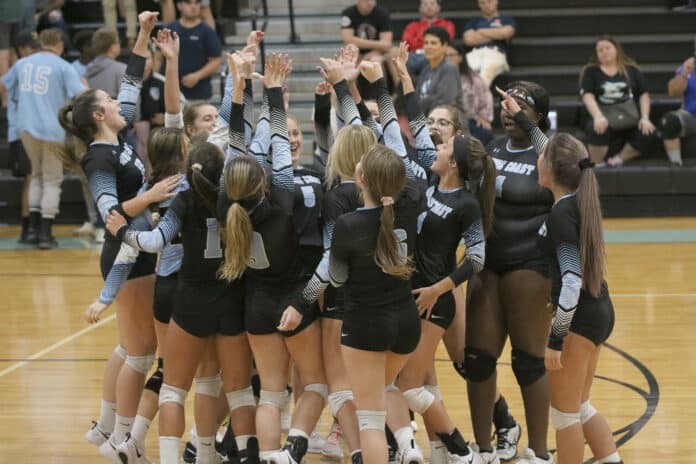 BROOKSVILLE, Fla. — It is a magical time of the season!

It is that time of the season — 4A District 6 Tournament time — and there’s magic everywhere and every team brings their own magic.

Tuesday night October 15, Hudson High School made their magic against Weeki Wachee High School, falling in the first game and looked like it would be a long night for the Cobras.

Hudson High School volleyball coach Stephen Jones, looked at his team, he made the right speech and Hudson High School returned to the court and finished the Hornets in four games, 3-1 and continued their way to the District finals against Nature Coast Tech High School.

Against the Sharks, Thursday night October 17, the magic ran out for the Cobras as they felt the bite of the Sharks and Hudson High School was defeated 3-0, and the Sharks won the 4A District 8 Title continuing their season in Regional Quarterfinals beginning Thursday October 24.

“They’re very excited, give them all the credit in the world their team was well prepared,” Jones said after the game. “They have good hitters, good setters and a very well-coached team.”

Outside the Gymnasium at Nature Coast Tech High School, the dark gray storm clouds gathered and the rain started to fall but the thunder that was heard and felt was inside the gym, out on the floor. The deep sound of the volleyball being punished was provided by the arm of Sharks’ captain senior outside hitter Madison Clark and with the rest of her teammates were out to punish that Wilson volleyball.

The storm that invaded inside the gym came to an untamed tempest at the start of the third game. Sophomore outside hitter Laura Sinsko dropped 17 points on her serve on Hudson and that provided the tone for the rest of the game. Nature Coast Tech defeated the Cobras 25-13, in the third game, won the District title and the Champion Trophy.

“It was kind of surreal, it was a perfect ending to the season.” Sinsko said. “Hard work pays off. It was crazy! I couldn’t believe that it was happening. Every ball,  I was just being aggressive and I said, ‘ I was going for it!’ and it was just in the right place.”

When the match’s winning point found the empty space, the scream of emotion of joy raised toward the tile ceiling, and supporting her team in the celebration just like she did during the contest against the Cobras, senior setter Karia Cantero-Garcia provided the leadership to her team and setting up the the thunder provided by Clark and the rest of the Sharks.

“Absolutely ecstatic!” Cantero-Garcia said after the game. “It is an honor to win it a second time in a row so being a senior it gives me a sense of fullness it really exciting.”

Cantero-Garcia describes her team is a unit and that adversity does not affect us out on the court. She says that they keep playing together as one team no matter what and that everybody gets along.

At the start of the match, Nature Coast Tech got together as a hard-hitting unit against the Cobras and dominated the match from the first game.

The game plan was simple by the Sharks, just hit the ball hard forced Hudson to play away from the net and that forced the Cobras into unforced errors.

“I feel awesome, super proud of this team at the beginning of the season if you asked people about the finish nobody would have picked us,” Nature Coast Tech High School volleyball coach Emily Gore said. “ The best part of this team they struggled a little bit early because we had a couple of stand out players from last year we had to find someone to step in and find that cohesiveness. It took us a few weeks but the last two and a half they have come together as a team.”

The celebration was loud, every player got a chance to hold the District Champion trophy but the hardest part is just ahead of them, waiting for the invitation to the Regional Quarterfinals and were they go to play.

Sharks’ volleyball fans are hoping that the magic stays around all the way to the State of Florida Volleyball Tournament being played at the SunCoast Credit Union Arena located in Ft.Myers starting Friday November 15-16, 2019 – that will be magical!