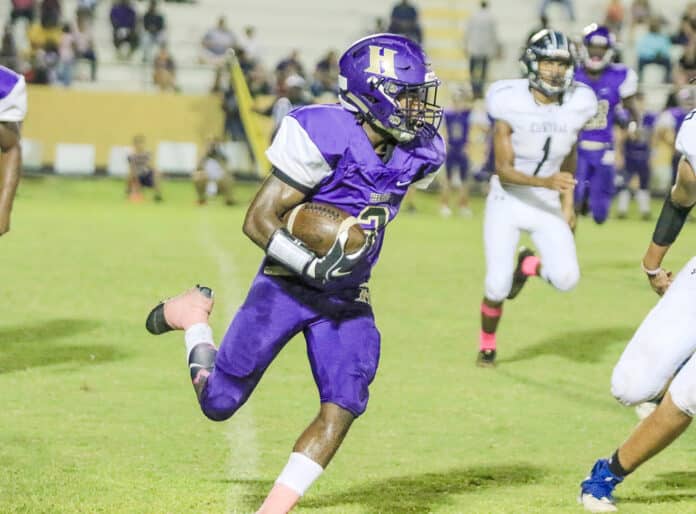 BROOKSVILLE, Fla. — The wait was worth it!

The football field at Tom Fischer Stadium was still soggy with some lingering puddles left over from the tropical storm. Finally, the wait at Hernando High School was over and the 2019 Homecoming football game was played.

Monday October 21 under the lights, Hernando High School defeated Central High School 37-8, and that made the Homecoming celebration for the Leopards fans inside the stadium.

Hernando High School used a combination of formations and executed a powerful multiple running game to punch through the Central defense. Leopards were led by Kev’on Williams who carried the ball 12 times for 83 yards and scored two touchdowns.

“We did some good things tonight, we finally broke some runs, we changed up a lot things this week going into the game,” Hernando High School football coach Robert Kazmier said, after the game. “We changed our blocking scheme, we changed up our personal our offensive line grouping and we saw some good things. It wasn’t pretty but we got the win!”

Kazmier unleashed his multiple front defense and the pressure from that squad had the ability to make it a long night for Central High School’s offense and for their quarterback Tre Joyner.  He spent the night dodging and sloshing through the muddy turf to get away from the wave of Leopards defenders.

The defense for the Leopards forced the Bears to turn the ball over three times and Joyner threw three interceptions.

Central High School football coach Robert Walden said, that his team could not get comfortable on offense and obviously the turnovers did not help his team.

“Self-inflicting stuff, the turnovers just killed us,” Walden said. “Three interceptions and back-to back fumbles, drives stopping penalties. We had them in a third and four situation and then we jump offsides- an automatic first down and that is how they scored their first touchdown.”

Coaches do not like watching their team turning the ball over and they really don’t like it if that turnover is converted into points. Walden is looking to correct the mistakes this week before the game against Weeki Wachee High School.

“Those things are correctable,” Walden said. “We have a short week and it is an important game against Weeki Wachee and our seniors really want to win.”

Kazmier and Walden do not appreciate the short week ahead of the teams and getting prepared against the next opponent but both coaches agree it is a good life-lesson for their players on handling adversity.

“We’re going to see what worked and what didn’t work and then make some more changes,” Kazmier said, about this week’s preparation for Friday’s game. “It’s a crazy week too! We had a rain shortened practice last week. Wednesday we had lightning come down and we had some adversity with that storm coming in. It’s a tough week, you usually have film study on Monday but now I have to pack all of that in a Tuesday and our kids are banged up. Got to make sure they get iced. It’s a very, very tough week ahead of us.”

The loud crowd watched the Farm Bureau scoreboard showing the time melting away in the fourth quarter and with the Leopards comfortably ahead of the Bears, the celebration of winning the Homecoming game was beginning to get started.

There was dancing in the aisle, high fives being distributed by students in the cement bleachers and the sweet sound of music started to fill the warm air of the night.

With pride Hernando High’s marching band replaced the football team out on the soggy football field and Kazmier and his assistant gathered the team for their meeting. He told the Leopards to go home to relax, because there is really no time for them to enjoy the victory over the Bears.

It is back to work and start the week’s practice getting ready for their next opponent, Nature Coast Tech High School.

“It’s a short week and we have to deal with it,” Kazmier said, as the band started their post-game performance. “We watched them live, we have a film on them. They are a tough team. We lost to Citrus and they blew out Citrus. We know that they are good, they won the District with that win over Citrus. They are tough, they are explosive, they are powerful, they are big and physical and they fly to the football defensively. We have to be ready in a few days.”

Once again, Friday night Oct. 25, if the weather cooperates, there will be a highly expected football game between Nature Coast Tech High School and Hernando High School, under the lights on the lush green grass of Tom Fisher Stadium. The kickoff is scheduled for 7:30 p.m.

Once again, the question will be raised to the crowd by the guy behind the public announcement microphone, just a simple question.

Are you ready for some Leopard football?

The answer should be shouted by the crowd – yes!

Without a doubt the game between Hernando High School and Nature Coast Tech High School – is going to be worth the wait!