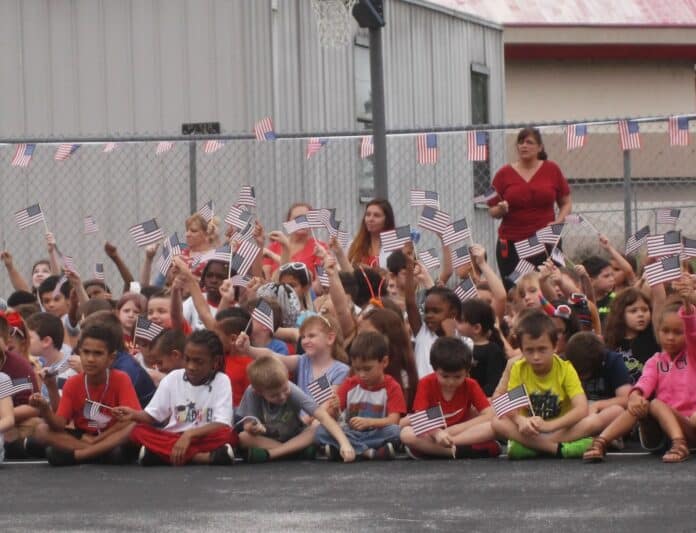 On Wednesday, November 6, the students and faculty of Westside Elementary School in Spring Hill held a ceremony to honor our nation’s veterans. Officiating at the event were Ms. Dana Kublick, Assistant Principal, and Mrs. Kristina Stratton, Principal of the school. Hernando County School Superintendent, John Stratton, along with the entire student body, parents and friends attended the ceremony. The children proudly waved small American flags.

Members of the Central High School Junior Naval ROTC presented the colors. They also performed drill team exercises. The Westside Tiger Chorus under the direction of Ms. Barb Weiss sang the National Anthem and several other patriotic songs. The Kindergarten class recited the Pledge of Allegiance.

Sixteen veterans were present, including four women veterans. Each one stood when his or her name was called and the student council members presented each of the service personnel with an American flag pin. Also honored were two deceased veterans whose children attend Westside Elementary.

Frank Trott, a retired Army veteran, stated, “I appreciate the children’s gratitude. The ceremony made me cry.”

David McCracken, an Army combat medic who served in the Viet Nam War, commented, “This is the best school veterans’ event I’ve attended.”

Lamont Proctor, a Navy veteran who served on river patrol boats in Viet Nam, remarked, “I’m glad they’re teaching kids to grow up to be patriots. I hope none of them ever has to go to war.”

The ceremony on Wednesday was just one of many Veterans’ Day events held in schools throughout the county. It is very gratifying to see that our service men and women, past and present, are not forgotten but are honored by the younger generation for their unselfish sacrifices.