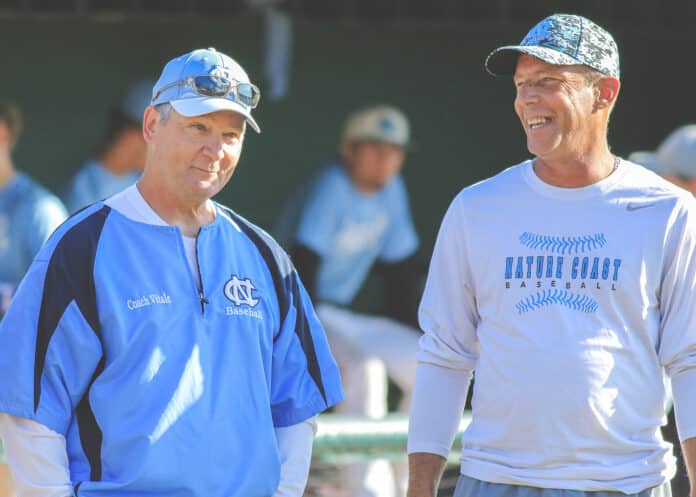 Four teams played Friday night at St. Leo University for the chance to proceed to Saturday’s line up. Among those four teams was Nature Coast Tech.

The Sharks defeated Brandon 5-2 on Friday night and advanced to Saturday’s lineup to play Wiregrass. After dealing with Florida’s weather, including a wet field, Nature Coast Tech won 2-0.

Sunday, November 10, the skies cleared and it was a beautiful day for baseball. The Sharks had been seeded to take on 2018 champions East Lake Tide.

Nature Coast Tech looked like they were on the way to playing the winner of Lakewood vs. Northeast, but things can change quickly. The top of the fifth was a perfect example that anything can happen.

Here it is: the top of the fifth, and the score was East Lake 4 – Nature Coast Tech 2. In the dugout Sharks’ Dillion Jones just received some advice from one of his coaches before he was up to bat. Chase Davis on second and Johnny McMath on first and Dillion up to bat.

Dillion hits, and of course, everything’s a blur… East Lake’s random throwing errors caused NCT to bring in three runs. The celebration on home plate for Dillion only lasted for a combination of two innings as East Lake retaliated with earning three runs in the bottom of the seventh to win the game 7-6.

However, all is not lost; tournament games are teaching tools. It can showcase how much drive, ambition, and team unity is displayed. Even though the coaches are never too far from focusing ahead for their upcoming spring season, this allows everyone the opportunity to figure out player placement and how much they can take on the field, on the mound, at the plate, and even in the dugout.

“It’s really not too much pressure, and nobody really worries about winning or losing,” NCT baseball coach Frank Vitale said. “When you get into tournaments like this, you want to compete against good teams, like today, yesterday, and the whole tournament. You want to up the intensity to get ready for the regular season.”

“All and all, we played a good tournament,” Vitale added.

Even though Weeki Wachee was eliminated after their third game during the previous weekend, the experience was a good starting point for them.

“This is the second year for us playing in the tournament and first year hosting. We had a great time and played some good teams. This tournament gave us a good idea of where we sit going into the spring season. We have some things to work on, but I’m pretty happy with how our fall season went,” said Weeki Wachee Coach Patrick McHugh (via Twitter).