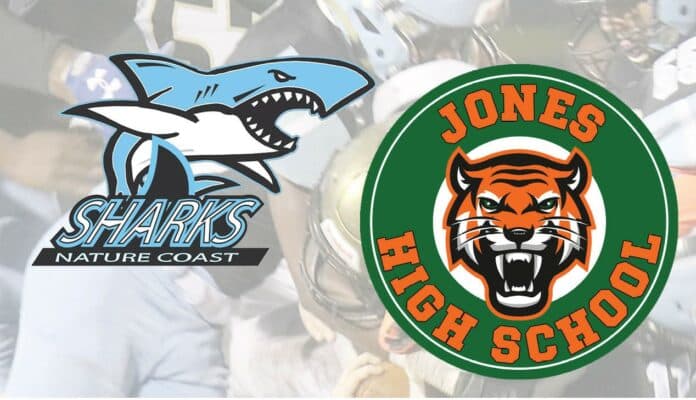 The regular season for prep football in Hernando County is finally over for Springstead, as they finish the 2019 campaign at 9-2. It’s not completely over for one other team however, as Nature Coast punched their tickets to the region semifinal round. Nature Coast had already defeated Inverness Citrus during the regular season and made it 2-for-2 when they upended the Hurricanes a second time last Friday. Now Nature Coast will face its toughest opponent of the year when they take on state power Orlando Jones on the road. One out of five of Hernando County’s squads will be in action for the postseason and the Sharks hope to advance a little closer to playing Thanksgiving week. We take a closer look at the playoff matchup on tap for Friday night.

Nature Coast (6-5) at Orlando Jones (10-1): The Sharks are no strangers when it comes to playing in the region semifinal round of the playoffs and this time last season, the Sharks were able to eke out a 17-16 victory against Baker County. That’s when the Sharks had the luxury of running the ball 35-plus times with the bulldozer that was Michael Weston in the backfield. This year’s version of Nature Coast’s offense is a bit more balanced across the board when it comes to running the ball and the leading rusher right now is quarterback Fabian Burnett. Burnett has guided the Sharks to another district championship this year and now with two solid victories over Inverness Citrus under his belt, Nature Coast will now take on a very tough Orlando Jones group. The Fighting Tigers are 10-1 on the season and Jones’ lone loss was a 28-14 decision against Orlando Edgewater. Orlando Jones has defeated an impressive host of other opponents along the way, including Apopka, Orlando Bishop Moore and Leesburg. If the Sharks look to have any chance of pulling off the major upset, it will all start on defense as they’ll have to contain Jones’ running back Avarius Sparrow, who rushed for 188 yards on 34 carries in last week’s 32-16 victory over Orlando Bishop Moore. Nature Coast was impressive in its 28-6 thrashing of Citrus and the defense will need to play its best game of the year.