HomeUncategorizedFood, Potent Potables and Music – A Recipe for Fun at Hernando...
Uncategorized

Food, Potent Potables and Music – A Recipe for Fun at Hernando Untapped Festival 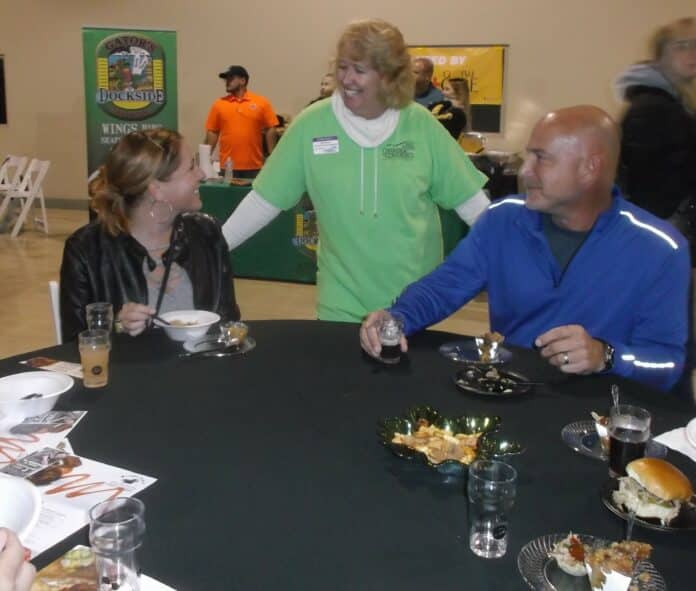 Despite the damp chilly weather, an enthusiastic crowd turned out to sample beer, wine and other “potent potables” at the Greater Hernando Chamber’s fifth annual Untapped Craft Beer and Wine Festival. The event took place on Friday, Nov. 15 at the American Aviation property at the airport. People dressed in warm coats, boots and hats started filing in at 5:00 p.m.

Those who had purchased VIP tickets for $75 were allowed in early and had exclusive access to the VIP area inside the hangar. They also received a free tasting glass and were able to sample free food prepared by area restaurants, as well as free drinks. Upon exiting the festival, the VIP ticket holders also got a canvas bag filled with goodies, such as a commemorative glass tumbler and a complimentary ticket to a Stage West production.

Bonefish Grill served up a spicy Bang Bang Shrimp. Texas Road House had cubed sirloin steak and corn, along with other dishes. Gator’s had chili to sample.

Approximately fifty vendors participated. Most had tents set up outside promoting their products and services. Two cigar stores offered cigars for sale. There were also businesses selling local honey, jewelry and other items. Several food trucks offered eats for sale. The  majority of the vendors were breweries, wineries and distilleries. They handed out free samples and never seemed to run out.

A committee made up of twelve people had been planning the event for almost a year. Lisa Callea, who just recently came on board as the chamber’s event program coordinator, noted the numerous volunteers that had showed up to do an assortment of tasks from setting up and helping direct traffic to checking ID’s and cleaning up afterwards.

Ms. Callea stated, “The purpose of the event is for businesses to come together and learn about each other. It’s also fund-raising for the chamber.”

Comments from those attending were positive and ranged from their favorite drink to the delicious food.

Debbie Smolik remarked, “Gator’s chili was great. I like the spiciness of it.”

“The best thing was the ability to sample from a lot of local businesses,” said Tom McDonald.

Heather Beck remarked, “We’ve come to this event every year and to see this many people come out in the rain is awesome.”

“The set up was well-organized. There was nice assortment of food and the band was great. We got great service inside the VIP tent and it was well-worth it,” stated first-time attendee Geri Krohn.

The Hernando Untapped Festival is just one of many public events that the Greater Hernando Chamber of Commerce hosts throughout the year. If you own a business it is well worth it to join the chamber. Along with having the opportunity to sponsor events like this and get your name in front of a lot of people, you can network with other businesses and attend free workshops. For more information on the chamber and its events go to www.hernandochamber.com or call 352-796-0697.