Appalachian Road Show to Appear at SYR in Brooksville 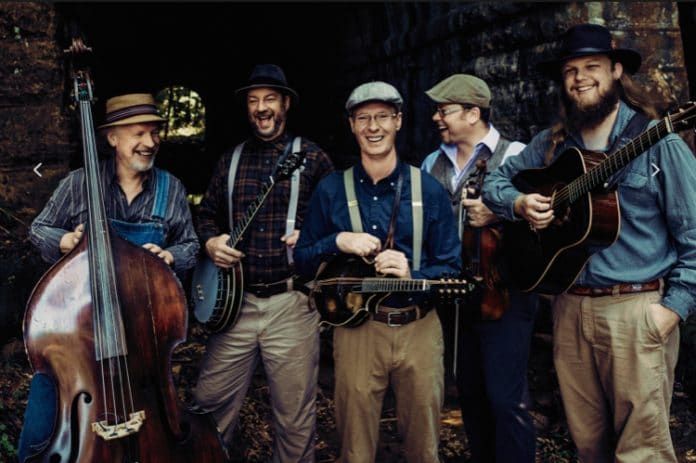 The Appalachian Road Show is excited to come back to Sertoma Youth Ranch again this year! They’re wrapping up their second album in their Nashville Studio but they had time to stop by and visit again!

Their Grammy-Nominated Fiddler, Jim VanCleve, graciously took the time to have an interview with us.

Here is his interview and unique story he shared with reporter, Jessica Williams.

Piano lessons, drums, violin, guitar lessons, marching band, saxophone, clarinet; many of us, as kids, have either played an instrument or attempted to play one.

Me? I took piano lessons for 7 years, from an older lady who lived on an old country dirt road.

I quit playing because it “wasn’t cool” anymore. To this day, I unfortunately have not touched the piano again.

But although I didn’t return to the piano, I recently discovered how those piano lessons would teach me a valuable lesson… and show me just how small this world really is.

Ahead of their performance at Sertoma Youth Ranch on Nov. 29 for the Thanksgiving Bluegrass Festival, I had an interview with Appalachian Road Show’s Jim VanCleve.  VanCleve plays the fiddle for this five-man powerhouse acoustic band. He is a well-known music producer and Grammy-nominated fiddler. He and his fellow bandmates bring to the table a mountain of talent, Grammy-Nominated and Grammy-Award winning accomplishments and incredible acoustic skills with each of them playing a different acoustic instrument. The Appalachian Road Show delivers a performance which is heavily-soaked in Appalachian Mountain aesthetic, heritage, and narrative while on stage, while singing songs which are embedded with timeless and soulful lyrics.

Along with Jim VanCleve, the band members include:

Barry Abernathy, a highly accomplished and well-known banjo player from apple country in Georgia. Barry’s unique trait is that he was born with only a thumb and part of an index finger on his left hand.

Darrell Webb, whose roots are in the coal country of West Virginia. He is a very successful multi-instrumentalist and vocalist.

Todd Phillips, a highly talented double-bassist: he has multiple acoustic-instrumental recordings and has won a Grammy Award for Best Bluegrass Album.

Zeb Snyder, a talented multi-instrumentalist to include guitar, mandolin, dobro, and bass. He is the guitarist for Appalachian Road Show.

A bit intimidated by Jim’s celebrity status, I will admit my nerves were dancing all over the place. They felt like unsettled piano fingers skedaddling across the keys.

Unexpectedly, it felt like I was talking to an old friend. Not a rock-star fiddler who toured and shared the stage with country music star Josh Turner for several years.

After a couple cups of coffee (and 3 cups for Jim), I settled down for his interview. Jim called me from his music studio in Nashville. We started from the beginning…

“I was about six or seven years old when I was handed my first fiddle,” he said, “before then I would watch my grandpa play small-town gigs. My grandpa was a preacher down in Englewood, Florida.”

Jessica: “That’s very interesting. I admire that. Are you from Florida?”

Jessica: “That’s so unique to have that in common. After moving from Florida, did you keep playing the fiddle?”

Jim: “Actually no. I had taken a break from it and put it on the shelf so to say. But when I was about 11 years old, my grandfather came to visit us in North Carolina. I had not played the fiddle in years but there was this local church picnic. My grandpa and my dad encouraged me to join in with the fiddle to play there. So I did. And ever since, I haven’t put it down. It’s just something that has always been a part of me. I have to add that my family was very into music. My grandpa and my dad were my heroes and I was encouraged by them a lot. My grandpa even carved/made his own dulcimers and acoustic instruments.”

Jessica: “Have you been to the Brooksville/ Hernando County area before?”

Jim: “Many Times. Yes. But mostly just driving through. However, Appalachian Road Show did play in Brooksville earlier this year. And before that, I was nearby at the Strawberry Festival performing with Josh Turner.

Jessica: “Do you have a signature food or refreshment you gravitate towards in the area?”

Jim:  “I do. When I was performing with Josh at The Strawberry Festival a few years ago, we had the best devil crabs. They were ridiculous! Our band leader was from Tampa, and he had arranged for them to be brought in. They were gone within minutes. It was crazy. So yes, if time allows, I will grab some of those while I’m there (laughing). And I do love Cuban sandwiches too.”

Come to find out, Jim has also performed with another famous Country Music Band, The Band Perry.  The Band Perry is a trio of siblings – Kimberly, Reid, and Neil who’s popularity skyrocketed on the country music charts almost 10 years ago.

“They’re a great and close family. Just good people,” he said. “I came on-board to perform with them a few years back when their talent and popularity first exploded.”

“My favorite song of theirs to play on fiddle is still ‘If I Die Young,’” Jim said. “It was just very well-written, and, full circle, now that she’s older, my daughter enjoys listening to it with her friends as well.”

The teaspoon of irony (I told Jim) was that I had met Kimberly Perry when I was a very young girl. She was just a couple years older than me. We took piano lessons as children for years from the same small-town piano teacher in Alabama.  Her family was very close, even back then. Kimberly and her younger brothers kept playing, and just like Jim VanCleve…it certainly paid off.

“This is one small world,” Jim said.

Jessica: “It definitely is”.

Below are a few of Jim VanCleve’s other accomplishments:

• Commissioned to write a new theme song for the International Bluegrass Music Awards in 2007.

• He was nominated for “Fiddler Player of the Year” in 2007 at IBMA (International Bluegrass Music Association).

• Also recruited to write an instrumental track for Sierra Hull (mandolin and vocal player often seen with Alison Krauss, and who is also an actress).

The Appalachian Road Show is scheduled to perform as part of the venue’s 40th Annual Thanksgiving Bluegrass Festival set for November 28-November 30, 2019.