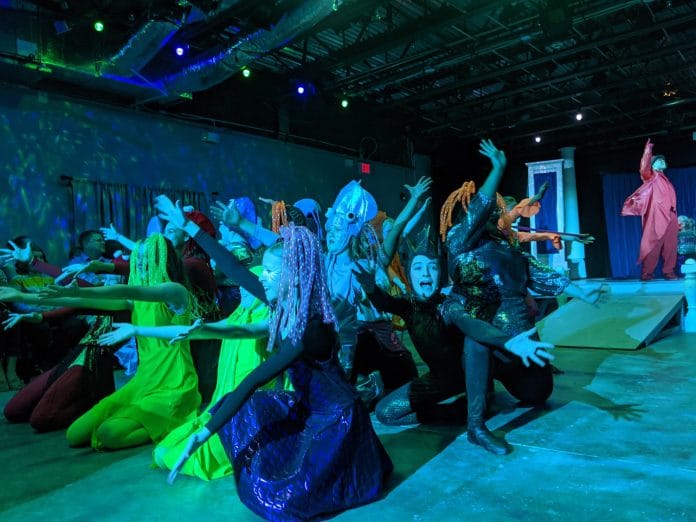 Live Oak Theatre’s performance of “The Little Mermaid” was simply tremendous.  We attended the Nov. 22 performance featuring the gold cast.  Live Oak alternates performers to give acting opportunities to a greater number of actors and actresses; from what I hear both casts were equally incredible.   This is a testament to the depth of talent Live Oak has cultivated throughout the years.  The costumes, acting, singing, makeup, stage and set design were above and beyond a community theatre production.  The lighting and seating orientation set the tone, immersing the audience in “The Little Mermaid’s” watery world.

From the opening scene, actress Adelle Richards, portrayed Ariel with a jubilant grace and a contagious smile.  When the magnificent ship seamlessly entered the main stage after Ariel’s “The World Above,” it was stunning and unexpected. The ship was expertly crafted and the booming voices of the sailors singing “Fathoms Below” mesmerized the audience.

The beloved underwater characters of the 1989 Disney film were given new life with the talent of Live Oak’s team. I particularly enjoyed Scuttle, the seagull and his tap dancing cohorts.  The young actor who played Scuttle, Christopher Alexander, hit the mark as well as the ingenious mind behind the costumes for the seabirds.  The white knee high socks with a dark stripe through the middle was certainly clever way to portray skinny bird legs!  Little Flounder, played by Titus Richards, hit his line every time and delivered a sarcastic humor that put the audience in stitches. Flounder’s hair and makeup was so detailed, Titus might still be washing off the blue and yellow shimmering paint used to create the impression of scales on his face.

Ursula, while she isn’t exactly a beloved character, was quite impressive.  Katie Moore belted out Poor Unfortunate Souls in a way Pat Carroll would be proud of.  Carroll, who is now 92, sang “Poor Unfortunate Souls” in the Disney film.
Prince Eric played by Chay Nott held himself with flawless poise.  I really enjoyed the dance between Prince Eric and Ariel in the second act: “One Step Closer.”  The young pair danced together so fluidly, it seemed as if they had been dancing together for a number of years.

The choreography was excellent, particularly in “Les Poissons” and “Kiss the Girl,” both of which were fast paced with many characters and complicated maneuvers on set.  Sebastian, played by Eje Walters, handled both scenes with excellent precision.  The interaction between Sebastian and Chef Louis (played by Greg Mys) was hilarious. Eje Walters is not a small guy.  I was wondering if they could indeed sell the idea that Sebastian was on the dinner menu. The stunts, antics and energy of this scene did make it quite convincing and very entertaining- the audience was definitely sold!

With the audience gathered around the stage, the expressions of audience members were priceless.  It was nice to see people smiling and enjoying themselves.
Live Oak’s performance of “The Little Mermaid” gave new life and energy to the popular story in a way I will never forget.