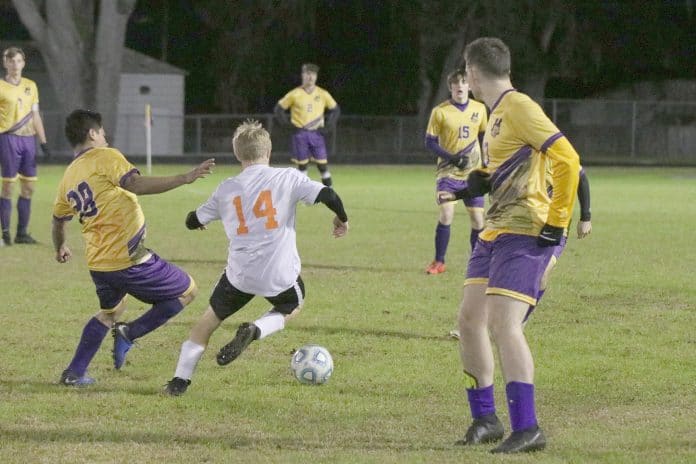 BROOKSVILLE, Fla. — Jacob Kelly may be the team’s leading goalscorer but the Hernando Leopards have struggled to piece together a consistent run of victories. A 7-1 victory on Monday night against Kris Brooks’ Central Bears started the week. The game halted at half time when Austin Jackson headed off to the ER with a broken leg. Team and match officials ended the game at half time. With the Hernando stand-in coach Tim Whatley on the sideline for this fixture, it was him and Brooks who came to the decision to stop the game.

The Leopards moved on to Wednesday night against a Zephyrhills team that had not won against the Leopards in over 3 years. That run came to an end however when Kelly’s lone strike for the Leopards wasn’t to be enough. Zephyrhills coming out on top 2-1.

Springstead Eagles then completed the double over Hernando as they walked away 4-2 victors. Peyton Burns and her Eagles moved to 5-4-3 on the season with that victory. Coach Burns didn’t have it all her own way however that week as a midweek trip to Citrus ended up 3-2 in favor of the home town Hurricanes.

Coach Tarbox and his Hornets of Weeki Wachee made it a double to remember as they convincingly beat Crystal River 4-1 before raking up 5 goals on the road at Central Bears. Bears coach Kris Brooks surely taking away a mental note of happiness against a Hornets side that is 10-1-1 on the season.

Seth Tarbox continued his good run of form as he added four more goals to his 2019-20 tally. Tarbox currently at 25 goals and 9 assists on the season means he has been involved in 34 of the 41 goals scored by the Hornets this term. The 5-8 170lb forward has amassed 42 goals in his 44 games for the Hornets at the Varsity Level.

Seth Calabrese’s Nature Coast Sharks remain unbeaten in district play as the took 4-1 victories against both Lecanto and Crystal River from the week. The only blemish being a 1-0 defeat at the hands of Wiregrass Ranch from Wesley Chapel.

Over at Hernando Christian Academy new head coach Micah Kahler (in his first coaching position, having recently graduated from across-town rivals — the Hernando Leopards) ended the year with back to back defeats on the road at St. John Lutheran and home to Bayshore Christian.

Sarah Bell and her Springstead Eagles girls soccer team ended the year on a high courtesy of a 2-0 victory at home. They end 2019 with a 3-6-3 record, after their third tie of the season 0-0 against Citrus.

Brandon Chitwood and his Nature Coast Sharks team started the week on a low note as they suffered their first defeat of the season. A 7-1 scoreline as Lecanto (10-2 on the season) were not afraid of the Sharks. Chitwood’s team responded in resounding fashion to end the year with 2-0 and 8-0 score lines against Pasco and Crystal River respectively.

Ken Brening’s side at Central Bears are still looking for their first win of the season after they succumbed to defeat against Hernando and at Weeki Wachee. The team did fight out a 1-1 tie on the road at Gulf to not end the final week of 2019 pointless.

Those very same Hernando Leopards went to 6-6-1 on the year as a 2 game week ended 1-1 with a win against the Bears. Unfortunately the year ended with defeat against the Eagles.

Amy Mainella and her Weeki Wachee Hornets had the best week of their season so far. They scored 10 goals in back to back wins. Crystal River came to the Hornets nest and left with a 4-1 defeat, sending them home with a sting in the tail. Next up was a road trip to Central and a hat trick of goals from Victoria Buzzin got them ‘buzzin’ to victory. The team eventually running out 6-1 victors.