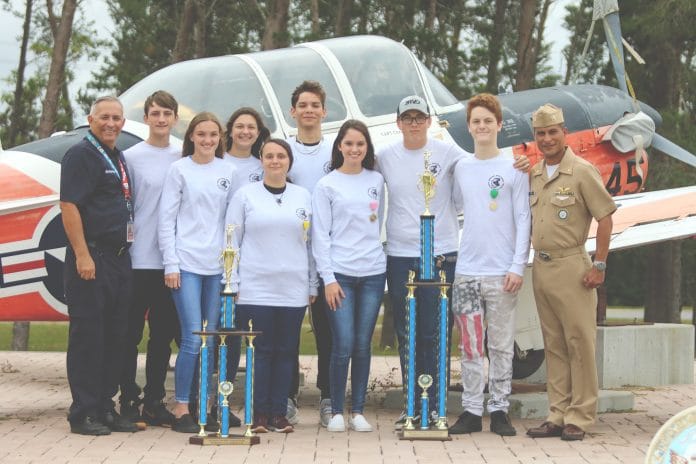 Brooksville, Fla. — Since the beginning of the 2019 school year at Central High, students from the Navy JROTC program have been competing in air rifle competitions.

“Our main job is to instill skills and citizenship values to our young cadets through a tough curriculum and extra-curricular activities,” Navy Veteran Commander Christian Cruz said. “It’s about discipline and giving them the skills that they need so they can be ready for what happens after high school.”

On Dec. 14, 2019 Central Navy JROTC won the Civilian Marksmanship Program State of Florida Championship in Jacksonville at the Gateway Rifle Pistol Club, and this is their third year in a row to take home the first-place trophy.

At these competitions, all the students have to be prepared and mentally focused without any outside personal distractions.

“When I first joined JROTC I saw they had a rifle team, I really wanted to do that,” said Team Commander Lieutenant LeeAnn Wallace. “I like that we do this as a team. It’s really helped me with my self-discipline because practicing it takes a lot of work and a lot of time to improve.”

All of the Navy JROTC students at Central High School have been solid in their performance at each competition. They continue to showcase higher standards of sportsmanship, as well as their commitment to the sport.

“That feeling of accomplishment… when you break a goal that you didn’t think you’d be able to break but also all your team members are able to do it too,” Brent Howard said. “It’s a great feeling.”

“They are absolutely doing amazing,” said air rifle coach Master Gunnery Sergeant Arnett. “I am so very proud of them foremost. As teachers, we always talk about how to be successful and be resilient in the face of situations that come against you. These kids are all that.”

“These kids, they challenge me as a coach, and I have to come up with ways to help them be better than they are. When you give your time and effort into the kids, and they grow and learn from what you are trying to teach them and excel at it, as a coach you can’t ask for anything better than that,” Master Gunnery Sergeant Arnett added.

Previous Shoulder to Shoulder Competitions (A shoulder to shoulder is when the competitors stand side by side during competitions.)

-Central High School Navy JROTC placed first out of 20 schools for the past three years.

Up ahead for the team:

The Navy JROTC Nationals in Chandler, Arizona, in February. If in the top twelve Central High School Navy JROTC will move on to the All Services at Camp Perry, Ohio in March to represent the Navy.