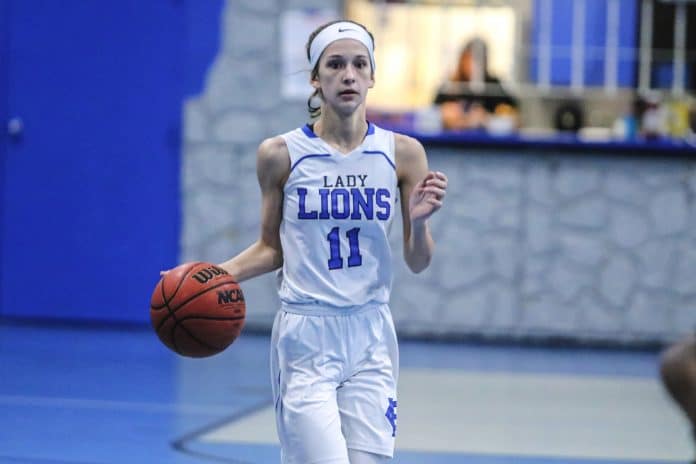 Hernando Christian Academy is steam rolling along to maintain their top position for the girls’  basketball program in Hernando County. With Mike Drummond leading the Lady Lions in a 17-1 season, he relies on the team’s continued efforts to keep the plays in motion.

“They have been playing together for so long, their basketball IQ is very high,” Hernando Christian Academy basketball coach Mike Drummond said. “I have been blessed the last three or four years.  I have had some girls that really have a high basketball IQ, this group in particular, I feel like I am able to coach at a little higher level.”

Only three more games of the season are left for these girls. With the end of the season approaching, they will be facing some good competition on the court. Thursday night, January 23, they compete against Real Life Christian Academy and on Friday night they travel to Land O’ Lakes to play Academy of the Lake.

Real Life Christian Academy is currently at nine wins and five losses. The players to watch are Tenaya Bennett (24) and Kiana Bennett. Tenaya, according to the 13 game stats posted on MaxPreps, is averaging around 9 steals or above per game. Kiana Bennett has 13 rebounds or over per game. Overall it could very well be a strong defensive game.

HCA’s final game of the season will be against Academy of the Lake. The Wildcats currently have 8 wins and 8 losses. One player on the team to watch is Senior Jacqueline Laihinen. Jacqueline’s last year’s stats on MaxPreps averaged around 13 points per game and shows proficient rebounds.

Unfortunately, there are no current stats posted for the 2019/2020 season.

“Hopefully though we can get through the district and then see what damage we can do in the regionals,” said Drummond.

When the Lady Lions defeated Lakeside Christian 48-11 on Friday night, January 17, that qualified HCA to compete in the conference championship games.

“Everything works in cycles.  Ten years ago HCA was known for softball.  I know nothing is going to last forever and I want to enjoy this for as long as I can and keep the program going,” Drummond said.