HomeUncategorizedBrooksville resident inducted into the Sons of the American Revolution
Uncategorized

Brooksville resident inducted into the Sons of the American Revolution 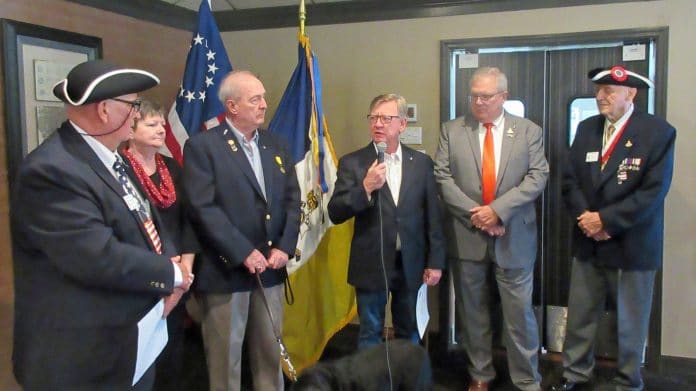 At the January meeting of The Withlacoochee Chapter of the Sons of the American Revolution, Compatriot Thomas Edward Barnette, of Brooksville, was inducted during ceremonies among the attending membership. Compatriot Barnette’s patriot ancestor was Dennis Canfield of Vermont. During the ceremony the SAR rosette was pinned on the left lapel of his blazer. Pictured from left to right are Chapter President David Hitchcock,; Assistant to the Registrar; Vicki Brown, Registrar Stephen Brown; Compatriot Thomas Barnette, Judge Richard “Ric” Howard, and Chapter Past President Charles Day. Men residing in Citrus and Hernando Counties, and interested in honoring their Patriot Ancestor, with membership in the Withlacoochee Chapter of the Sons of the American Revolution, should contact Registrar Stephen Brown at (352) 564-4295, or see the Chapter web site at www.withsar.org/