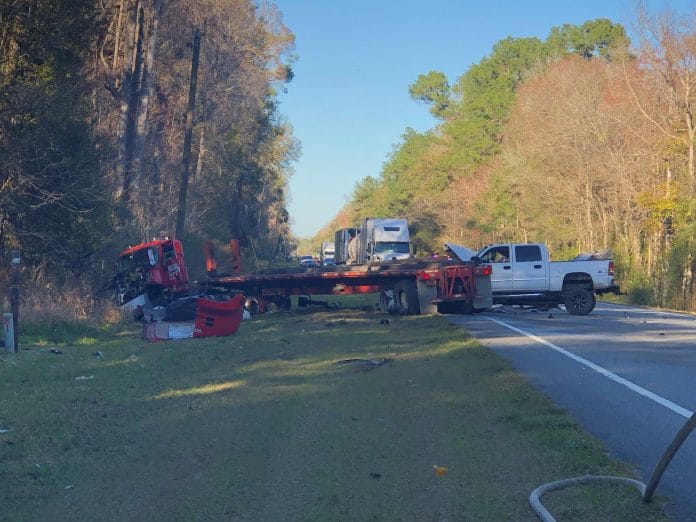 On 2/3/20 at 4:10 PM at SR-50 and Riverland Clay Sink Road, a 2014 Chevrolet Malibu driven by Jose Moreno, 38, of Groveland Florida, was traveling westbound on SR-50, west of Riverland Clay Sink Road. A second vehicle, a 2016 Mack semi tractor-trailer driven by Oscar Peraza, 38, of Groveland Florida, was traveling eastbound on SR-50.  A third vehicle, a 2018 Toyota Tacoma driven by Eric Easter, 57, of Dade City, was traveling westbound on SR-50, directly behind the Chevrolet Malibu. A fourth vehicle, a 2006 GMC Sierra, driven by Garrett Cramer, 24, of Webster Florida, was traveling westbound on SR-50, directly behind the Toyota Tacoma. Mr. Moreno, the Malibu, lost control of his vehicle for an unknown reason and crossed into the eastbound lane of SR-50. As a result, the front of the Malibu struck the left side of Mr. Peraza’s semi.  The trailer towed by the semi also struck the Malibu, traveling over the vehicle.  The semi continued forward and collided with the left side of the Toyota Tacoma which then overturned.  The semi then entered the shoulder and jackknifed before coming to a final rest, at which point the fourth vehicle collided with the trailer of the semi. Mr. Easter, the driver of the Tacoma, was transported to an area hospital and later expired from injuries sustained during the crash. The driver of the Malibu, Mr. Moreno and his passenger, Adrian Reyes, 28, of Mascotte Florida were transported to Lakeland Regional Hospital and were in serious condition at the time of the accident. A third passenger of the Malibu, Genesis Reyna, 6, had minor injuries and was also transported to Lakeland Regional Hospital. The driver of the Mack Semi Tractor Trailer, Mr. Peraza, was transported to Advent Health Dade City with serious injuries. The fourth driver, the GMC, Mr. Cramer, was treated at the scene with minor injuries. Charges are pending. The press release reports all were wearing seat belts and alcohol did not appear to be a factor in this accident.