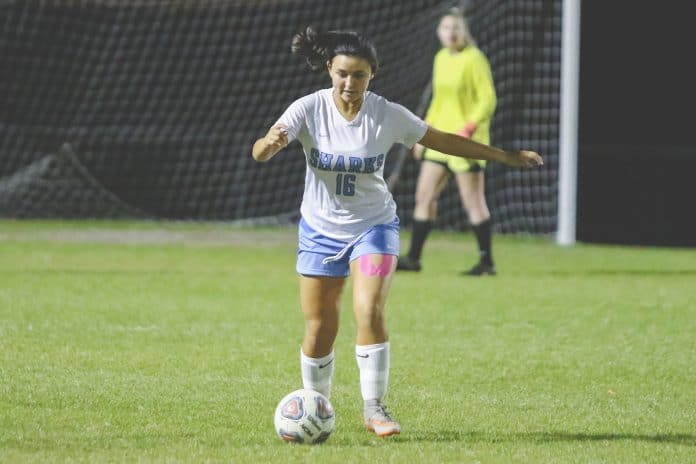 Under the leadership of Amy Mainella, these girls showed that being the underdog is not such a bad thing.  “We had nothing to lose yesterday, so that’s what we went in with. I feel Nature Coast is a good team and we gave them that fight last night,” said Weeki Wachee girls soccer coach Amy Mainella. “They all walked away with their heads held high and had a great season.”

Throughout the season, Weeki Wachee seniors have mentored the underclassmen, they have taught their younger teammates what hard work and teamwork can accomplish.

“The seniors left a mark this year, and they should be proud of that,” Mainella said. “Some of the underclassmen they know that now’s their time to step up and to keep this going. It definitely will be interesting to see how we can continue to grow the program next year.”

This year after winning the first round of regionals against Weeki Wachee, the Sharks continue to the regional semi-finals on Friday, February 14, against Lemon Bay.

“Weeki Wachee came out and played hard, and I would say they even out hustled us in the midfield in the first half,” Chitwood said. “We had more people to switch to sub out and to get fresh legs in there. We never lost the talent edge at any point.”

Chitwood said that his team’s opportunity to switch out their players was just enough to overcome the incredible work of the Hornets’ midfielders.

This win over Weeki Wachee is bringing the Lady Sharks closer to reaching the ultimate goal, competing in the final four.

“There are a lot of obstacles in the way,” Brandon Chitwood said, referring to facing Lemon Bay. “I have no idea how they play, which could be a bit of an advantage for us actually because we can lock things down defensively.”

“At this point, we need to just work on all the little things that actually get you wins, because at this point it’s the small things that you never expect that end up punishing you or winning you a title,” Chitwood said.