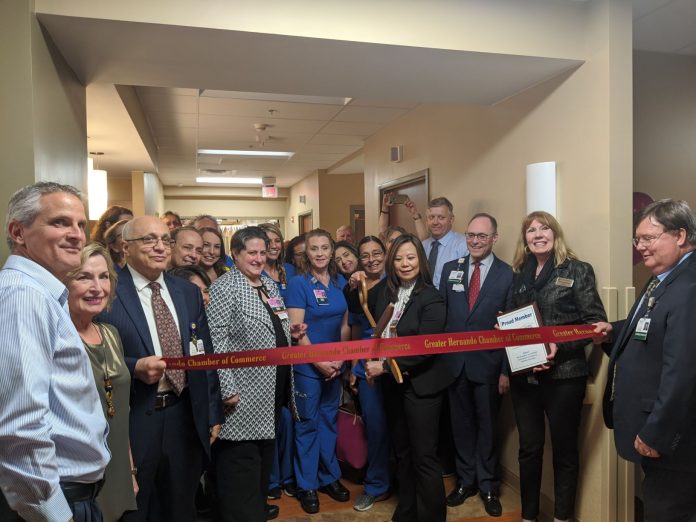 Oak Hill Hospital is undergoing a $100 million expansion. They are unveiling their new neonatal intensive care unit (NICU). The NICU provides care for premature babies and babies that require special care. In addition to the NICU there are 24 private rooms. The fifth floor will be opening soon providing 36 additional private rooms.

The NICU provides 10 large private rooms for mothers to be able to stay with their babies during this difficult time. This is provided that the mother is medically cleared and discharged.

Oak Hill’s new facility is a Level II NICU. A Level II NICU is commonly known as a local NICU. This type of NICU enables babies born prematurely but are at least 32 weeks or are more than 1500 grams (3.3 pounds) to stay in the community. This reduces strain on the family by enabling the infant to stay closer to home where they can be seen by their local physician. It also can support infants that require more advanced care. A Level II NICU may also be able to provide short-term intensive care.

The facility has two negative pressure rooms where an infant with a potential infection can be kept. The negative pressure means that the air from the hall will only enter the room reducing the chance of spreading the infant’s infection. If the door to the room is left open for too long, an alarm will sound.

The NICU is a secured unit that requires visual identification to access. There is also onsite security personnel 24 hours, 7 days a week.

The NICU is located on the fourth floor of the North Tower.  The Director of the NICU is Raquel Ferreira, MSN, RNC-NIC (Registered Nurse Certified-Neonatal Intensive Care), Director of Women’s Services.

Technology is also used in the NICU pharmacy. A Pyxis machine allows a provider to enter an order from anywhere. The pharmacist then receives the order, fills it and the medication is available in the machine. The average time that this takes is six minutes. To dispense the medication the nurse has to scan the medications barcode as well as the patients to prevent mistakes.

The new NICU will reduce costs for patients by enabling infants to stay at Oak Hill. It costs around $45,000 to airlift an infant to another hospital. Usually between 14 to 18 percent of infants will need to spend time in a NICU.