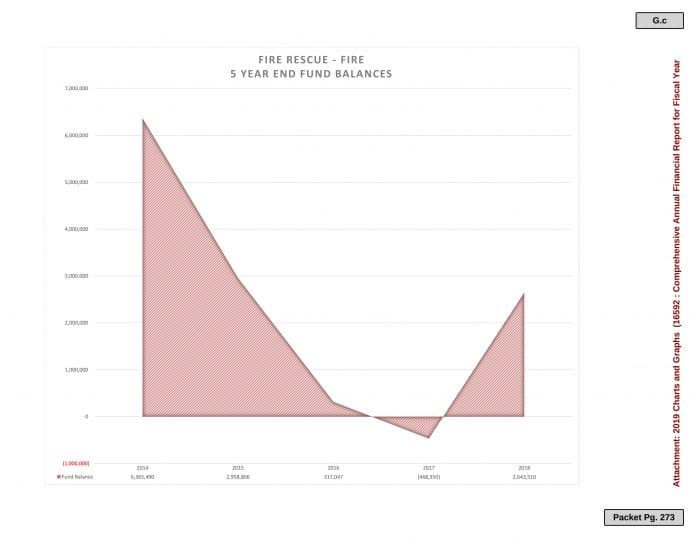 At the April 28th Board of County Commissioners (BOCC) meeting, Clerk of Court Doug Chorvat introduced the presentation of the Comprehensive Annual Financial Report (CAFR), which was conducted by Purvis Gray & Company, LLP.   Mark White of Purvis Gray introduced the overall audit results to the board, which essentially established that all accounting procedures were followed in accordance with Generally Accepted Accounting Principles (GAAP).

According to Purvis Gray, at the close of September 30, 2019, the County’s Financial Highlights include:

White summarized that through the last few tumultuous years, the overall budget is headed in a positive direction.  “The cost cutting actions that you took. Reducing (full time employees) and  looking at discretionary projects, and all the various costs reduced … Keep in mind that the tax base was growing, the appraised values were growing, so you were going to be getting a little bit of additional ad valorem revenue anyway. When we look at the general fund here instead of having a $9-million dollar loss for the 2019 year it was $600,000.  So all of your cost cutting effects really did the job.”

The results of the additional 1 mill of ad valorem levy will be shown in the 2020 budget, which will be reviewed next year.

To this, Commissioner Steve Champion said, “How did we get it so wrong to go from a $9- million dollar deficit … to $600,000? And in hindsight, if we knew that then we wouldn’t have had to raise taxes.”

White admitted that Champion’s question was beyond the scope of the audit, but that he could comment that the cutting of expenses and discretionary items which he termed, “checkbook accounting.”  White added, “If you buy or construct a building it doesn’t go on the balance sheet of the general fund, it’s just an expenditure.”  The new courthouse and radio systems for emergency services have been delayed, and do not appear as expenses for the 2019 budget.

Champion countered that the increase in funds appeared to be in revenues, such as a $1-million increase in fines and $2-million in fees for services. “This would have been good to know instead of raising the millage 18%.”

Looking into the future, Champion expressed concern over long-term effects of the current mass quarantine.  “If something happens, and property doesn’t grow and revenue doesn’t come in … by raising taxes and not cutting the government we’re in big trouble. This could very well come to light.”

For situations like this, there is the reserve fund, which has been improving since its alarming drop in the 2018 fiscal year.

White agreed and said, “You’re probably not seeing the results of the decline in economic activity, but you will from here on out. It’s gonna be in the numbers going forward and we’ll see about ad valorem,” hinting that it may be too soon to judge its impact on the budget going into 2020.

Assistant Finance Director Francis Pioszak presented and explained the finer points of the CAFR, and answered the resulting questions from the board members.  From property taxes, revenues have increased, for the most part moving the county in the right direction.

Regarding the fire department, Pioszak said, “In fiscal year 2018 fire received half a mill and that brought in $3.7-million in revenue.  Their special assessments for that year was about $20-million so they had about $24-million in revenue.  That additional mill was discontinued for 2019 their special assessments came in for 2019 at about $27-million so that increase in revenue from the 24 million to 28 million — 2019 had a really good positive impact on their excess of revenues over expenditures for the year.”

The fund balance for the year for 2019 for fire increased about five million.