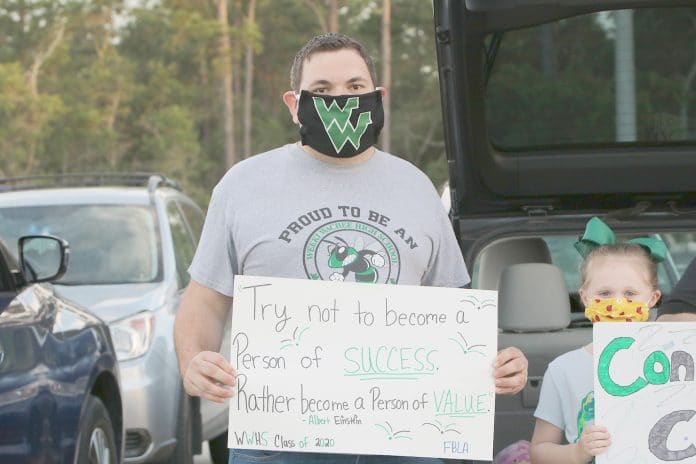 by SARAH NACHIN and SUMMER HAMPTON

The year 2020 will be memorable to Hernando County High School Seniors in more ways than one. It not only represents the culmination of twelve years of education and the commencement of their new lives as they go out into the world, but it also represents a unique time in the history of our country. COVID-19 has changed the way we conduct business, schooling and every aspect of our existence.

Because school was not in session, the Senior classes at Springstead, Central, Weeki Wachee, Hernando and Nature Coast High Schools could not have their traditional “walk-out,” so school administrators planned a “drive-out” instead.

Seniors and their friends and families started gathering near their respective schools at 7:30 on Friday evening, May 15 in anticipation of the 8:20 commencement of a parade of cars through the school parking lots. Vehicles were decorated with balloons and signs congratulating the Class of 2020.

At Springstead High School a festive group of people excitedly gathered at Spring Hill Baptist Church adjacent to the school. Neighbors of the school gathered along Mariner Boulevard to watch the parade.

Riley Wilson and Makenna Messaris already have their immediate futures planned out. Riley plans to major in Political Science at Florida State University and Makenna is going to attend the University of South Florida Honors College and major in Biomedical Engineering.

Online classes were an adjustment for everyone – students, teachers and parents.

“It was a little easier, but it was a lot different from regular school. The challenges of having AP [Advancement Placement] classes was different too,” stated Riley.

“AP classes are hard on line, especially with testing. The actual workload wasn’t that much different,” remarked Makenna.

Triton White wants to attend college also and eventually go into Cyber Security, while Brandon Bilotta plans to go into Computer Engineering. Both students felt it was easier doing their classes online. The only exception was gym. They had to make a fitness log weekly. They would work out, run, swim and do other activities and record their progress. They were able to do their classes at their own pace and on their own schedule – morning, afternoon or evening. Their friend, Michael Lamantia wants to go to college and become a pharmacist. He plans to attend St. Leo College.

At Central High School, cars started lining up at West Hernando Middle School off Grove Road. Family and friends parked their cars on the grass opposite the two schools to cheer on the students. Pictures of the graduates were posted along the parade route.

There was a loud cacophony of honking reminiscent of a Super Bowl victory celebration. The sound of fireworks filled the night air. Teachers stood at various locations to ensure that the procession was organized.

As things wrapped up around 8:45 p.m. you could still hear the sound of cheers and whooping as the cars left the area.

At Hernando High School, individual photos of the graduates were attached to the fence along the Howell Ave. sidewalk. Parents, siblings and friends parked along Howell and cheered as the Seniors drove past their school with purple and gold balloons and streamers trailing from their cars.  Some furry family members even showed up for the celebration. The parents of these senior Leopards brought banners with messages of pride to wave.  After the Senior class rolled by, it was a bittersweet moment for many families as they removed their graduate’s photo from the fence.

At Nature Coast Technical high school, students and their families drove through campus, where staff was lined up with candles and photos of the seniors. Here, each car got the opportunity to slow down and speak out to teachers. Students were advised to decorate their cars, bring banners, and do whatever else they wanted to show their school pride; and when it comes to school spirit, you know NCT always shows out. Seniors took decoration to the next level and came with streamers, confetti, air horns, signs, bubbles, and even cardboard cutouts of students’ faces. Families came in full and many had chairs set up in the back of their trucks with drinks and snacks. Students gave out tokens of their gratitude, some made signs of thanks and others gave items like flowers to teachers. The mix of pop and country music was the perfect background for this quarantine parade.  The stadium lit up blue as shark pride overflowed and swelled in everyone’s hearts.

Tears flowed from practically every pair of eyes, cries of celebration, joy, longing, and sadness rang through the air. This year had especially been hard and you could see what everyone was thinking, it was written all over their faces; we made it.

Senior class coordinator Tara Ferlita spoke on the event and saying goodbye to her seniors this way, “ I feel sad that we had to say goodbye this way, but this was fun! Mrs. Noyes suggested we make this a tradition.”

Mrs. Noyes, who is NCT’s principal, said, “ This event is so bittersweet. I feel bad that students couldn’t have their traditional senior day. But, this has been an amazing thing during this time.”

Over in Weeki Wachee, the seniors took their last buzz around the Hornets’ nest with as much school spirit, pride and joy as their area counterparts.  A video of the parade was posted to the schools’ Facebook page which received numerous congratulations as well as a comment about how the roll out should become a new tradition.

Jennifer Curry Rober said,  “This was wonderful!! They should consider it for every year forward! It was a great tribute and very fun!!”

In the end, the roll out is meant to signify the end of the old and beginning of a new era for you seniors. One that will be harder than before, but rewarding in ways you never knew possible. But remember, when you feel like stopping, think about why you started.

One aspect of this special celebration will remain the same as in past years. The schools are still planning an actual graduation ceremony. However, it has been postponed until July 30. One thing is certain, the Class of 2020 will have plenty to tell their children and grandchildren about this very unique time in their lives.