The Appendectomy Club (Part one) 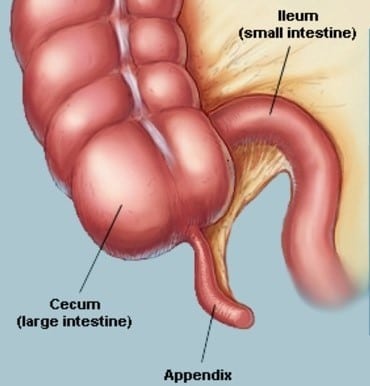 Recently my granddaughter’s boyfriend, Little James, had his appendix out.  I text her to tell him: Welcome to the Appendectomy Club.  And really, I suppose we should start a club for that.  After I had mine out, I read up on it.  Back then, the appendix was considered a vestigial organ that at some point in human evolution was part of the digestive system but now only does one thing, cause appendicitis.  Lately it’s thought that perhaps it produces good bacteria for the large intestines—since it’s located at the junction of that and the small intestines—but still no one really knows.  Ours would be a mystery club, in a library-like room full of medical journals and weblinks to whoever might still be researching that mysterious body part.  We will wear smoking jackets and puff on pipes and cigars while sipping after-dinner brandy.  (Pizza and beer.)

On the first of November 1980, Saturday, the day after Halloween, I had what felt like hunger pangs.  It was about two hours after supper, and that was unusual for me, to be hungry so soon, but I ate an apple, and went back to lounging on the couch while watching TV and reading a book during commercials.  I think the paperback was The Veils of Azlaroc, something I’d read before, probably twice by then.  (Why isn’t it a movie?!)

A little later the pang became a pain, right in the pit of my stomach, about two inches below the bottom of my sternum.  My wife, nine months pregnant with our second child, was getting ready to feed our firstborn, two years old, when I decided I’d better go to the emergency room of the military hospital.  The doctor, a captain, told me it was probably food poisoning.  I argued that my wife ate the same meal I did (a can of Campbell’s vegetable beef soup stirred into a pot of al dente boiled elbow macaroni—we ate a lot of that back then, and it’s one of my favorites even now) and she wasn’t sick.  But the doctor insisted on that diagnosis, so I went home.

Around eleven that night the pain got so bad that my wife strapped our toddler into the car seat and took me back to the ER.  The doctor read my record and advised me that yes, it was food poisoning, and I should go home and sweat if off.  It wasn’t until I threw up on his desk that he decided that maybe I had appendicitis and should be admitted.  The next thing I remember is slowly waking up in a hospital bed.  I kept trying to wave away a cold cloud that was misting in front of my face, which was actually a humidifier, I learned later.

It was sometime in the early afternoon of the 2nd of November when I awoke wide awake and had to go to the bathroom.  I asked an orderly if I could get up, and he said sure.  I slid out of the bed and was surprised to find that I felt no pain.  I knew I’d had surgery, but I didn’t hurt in any way, and was impressed by the 80’s medical technology.  I strode down to the latrine and into a stall with upright pride.  After I did my business of number one and two, I stood to flush the toilet and my right leg suddenly seemed glued to my chest.  I couldn’t lower it.  I walked back to my bed like Lon Chaney’s Quasimodo, as though my thigh was strapped to my torso for a special effect, hunched over my right leg, and scooting myself forward with my left.  (Continued.)