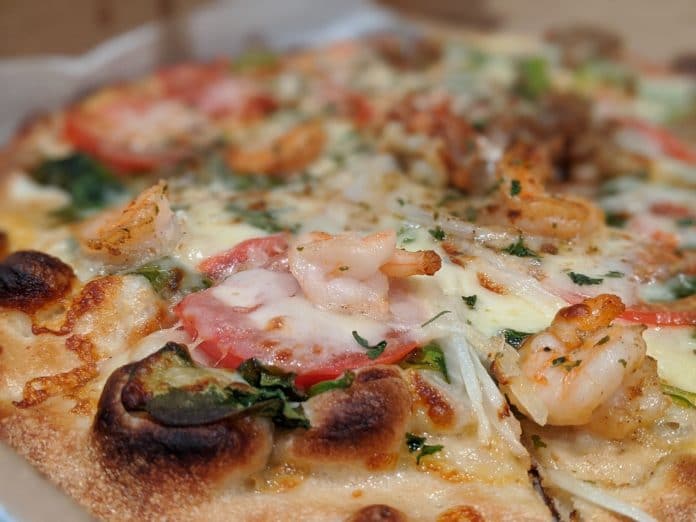 Florida Cracker Tap Room normally is a gathering spot in Brooksville next to the Florida Cracker Kitchen. The tap room is located at 962 E Jefferson St. They sell craft beers and host tap takeovers from local breweries including Marker 48 and Tidal Brewing.

In addition to the craft beer and wines they also sell stone fire pizza. Due to the Safer at Home order they are highlighting their stone fire pizzas at the tap room. You can wait inside for your food to be ready.

In addition to the traditional thin crust pizzas they provide creative fare. We ordered four of their pizzas which are probably 14″ in diameter. The pizzas had a thin crispy crust. The first to disappear was the shrimp, tomato, and spinach pizza with cajun seasoning. That was followed by the sausage and pepper and pepperoni pizzas. The one that lasted the longest was the sh-room-a-lot pizza and that was because the kids have an aversion to mushrooms.

The Florida Cracker kitchen has become a foodie destination, but the Tap Room is less well known. It is mostly a hangout for the locals.

The Hensley brothers give a lot back to the community from being pivotal in the erection of the silos that mark some of the entrances to Brooksville to feeding the Hernando High Football team before games.