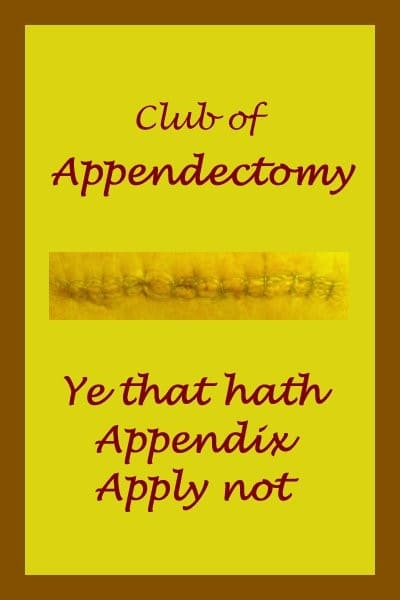 Per the recommendations of the medical staff, I exercised often, getting up, walking down the hall, opening the heavy door to the smoking room, sitting down to have a cigarette while staring out the window at the parade field, and returning to bed.  I exercised a lot that way.  And going to the bathroom now and then.

By the next day, Monday, I was still sore but walking only with a slight limp.  They let me go home around noon, and I was surprised and delighted to learn that I was given two weeks of convalescent leave from duty.  Very unlike the military in my experience:  I’d had two other operations, a cyst cut out of my back a few years earlier, after which they sent me back to work, and before that I had all four of my wisdom teeth pulled, after which they sent me back to work.  So I fully expected to go back to work that afternoon, and was thankful that this happened over the weekend and had at least Sunday to recuperate.  But no.  Two weeks off!  Wow.

That evening my wife helped me change my bandage, and for the first time I saw in the bathroom mirror what the surgeon had done.  Apparently he had to get both hands and an elbow in there because the wound was five inches long, closed with staples.  (A few years ago my wife had her gallbladder out and there’s barely a mark on her.  Little James probably has a little scar just the same.  Surgery in the 21st century is less intrusive.  I’m convinced back in my time they sliced you open wide enough so attending newbie doctors could get a look at real internal organs.)

Around three in the afternoon the next day, Tuesday, my wife went into labor.  I rushed her to the hospital, and at 6:28 that night my second child was born.  My in-laws had come to stay with us three weeks before, a week before the due date, but after nine days they had to leave for work. So I was taking care of our first kid by myself, and after three hours of keeping up with her in the waiting room, and after her sister was born, we returned home so both of us could eat.  We went back around eight, stayed until nine, and finally went home to bed, with my firstborn fast asleep by then; babies make a bed wherever they happen to be.  I had not even thought about my own emergency procedure; there was no pain the whole time.

The next morning it felt again like I’d just had surgery.  The skin and fat and muscle that had been scalpelled was just as sore as that first morning, and I held onto cabinets and the dining room table, like they were structures of Notre Dame, while hunching my way from bed to feed my toddler.  The medical community had by then started discharging new mothers as soon as possible, so late that day, the 5th, I picked up my wife and our newborn and brought them home.

I had two weeks off, and that worked great!  I was doing paternity leave before it became popular.  But as my wound healed, I found that belly hairs were curling around in a spiral just under the skin right over the scar.  For weeks I had to prick at them with a sewing needle and plucked them with tweezers like digging out splinters.  I should make that a required nuisance for joining The Appendectomy Club.  And I’d have a wooden sign made that reads: “Club of Appendectomy…Ye that hath Appendix Apply not,” with a carved image of that stapled scar.  [email protected]